Filmwax is screening a terrific documentary on February 4th called “The Pass It On Project“.  The project is a road trip to the sites of the Civil Rights Movement for a group of Brooklyn middle schoolers and it becomes a path to re-imagining their future.  I interviewed the director of the film, Melissa Nicolardi.  It’s clear that this project was a life changer for the young filmmaker as well.

Adam Schartoff: How did you initially become involved with this school?

Melissa Nicolardi: Producer Kalim Armstrong had an interest in exploring education as a topic for a documentary film. He was introduced to the teachers through a mutual friend of theirs. We were in graduate school at Hunter College together.  He knew that I also had an interesting making a film about education and he approached me about collaborating on the project.

AS:  At what point did you decide that this project was worthy of a documentary?

MN: Kalim and I immediately agreed that the project was worthy of a documentary. I used to teach middle school, and that is such an interesting age. The kids are just starting to come into themselves and figuring out who they are and how they fit into the world around them.

The 2008 Election —the election of the first African-American president— was certainly a defining moment in US history, and probably one of the first of those moments for the students in the film. The idea of watching them process that moment by relating it back to the Civil Rights struggle was very intriguing. We had a feeling that it would be transformative for them. And it was.

We also felt that the mission of the Project —as stated by the teachers— to open up a dialogue about race and racism, history and social justice in their school- was important, and the time was ripe to put that story out into the world.

AS:  What did you learn during the course of the film that was most surprising?

MN:  The most surprising thing for me was the omnipresence, the sense of closeness to the history of the Civil Rights Movement that I felt once we got down south. I grew up in the northeast and it was my first time visiting any of the cities we went to. It’s a very different relationship to the history geographically, and it was really powerful to be there where these incredibly important, fairly recent, revolutionary events took place. That’s actually a lot of what that film is about, and it was really incredible to experience it with the kids.

AS:  Was there any point during the making of the film where you thought it might not come out the way you were planning? 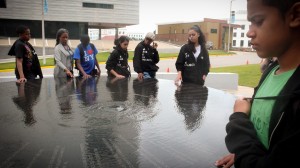 MN:  Every day was a surprise! Working in documentary is unpredictable and working with teenagers is also unpredictable. I think in those moments when the teachers were like “Are they getting it? Are they?”, we were also thinking, “Oh no! What if they don’t get it? We can’t make a film about them not getting it! That would be terrible!”

AS:  Did you have a prior interest in our country’s history of civil rights?

MN:  I have always had an interest in social justice and activism in general, especially its intersection with education. I have long believed —well before Arne Duncan and President Obama said so— that education is the civil rights issue of our time. I never thought to myself that I would make a film about the Civil Rights Movement and, I have to say, I learned a lot about the Movement that I hadn’t learned in school.  I have thought a lot about the effects of institutionalized racism, especially how it plays out in our education system.

AS:  What did you learn from the school children?

MN:  That’s such a difficult question! I was so taken by their sense of closeness, how they so quickly became a family on the trip, and how open they were to each other and to the experiences that they were having and the people that they were meeting… even when it didn’t seem like they were. I would’ve loved to be even more inside their heads in those moments. They are all such incredible people. It was a reminder, or an affirmation, I think, of how powerful young people can be.  It’s our job as a society to guide them to accessing that power and then to trust them with it. We really need to have higher expectations for our young people, while still letting them be kids. 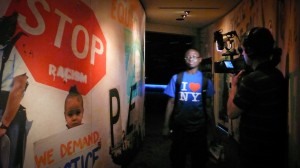 AS:  Did you have any encounters or incidents that stand out during the making of the film?

MN:  Almost too many to choose from! The moment that Congressman John Lewis walked in to his office after we’d been waiting for him for quite some time. (He was in session for one of the health care caucuses, I think.)  He came back as soon as it ended to meet with the students. The air in the room changed. His presence was just so incredible, and he was so kind to the kids, really generous with his time. It was such a privilege to meet him and to see him interact with the students. Definitely memorable.

AS:  Have the kids or teachers seen the film yet? If so, what were their reactions? If not, what do you hope they take away from the film?

MN:  The teachers have seen it, but the students and their families have not. We’re holding a private screening for them the night before the Filmwax screening. I hope that the students watch the film and recognize how powerful they are. They are such incredible people, each and every one of them. I hope that reliving this experience reminds them of everything that they took away from it, and inspires them to keep on growing.

AS:   What do you hope this film will accomplish?

MN:  We hope that this film is used to further the mission of the program that it documents; to open up an honest dialogue about racism and injustice —both then and now— and to encourage people, especially young people, to participate in social justice activism. We hope that it provides a model for what education can look like and what young people are capable of when given the opportunity. We also hope that in some small way it pays tribute to the heroes of the Civil Rights Movement, those we’ve heard of and those thousands whose names we don’t know.

AS:  What’s next for Melissa Nicolardi & Kalim Armstrong?

MN:  I’m still focused on getting this film out there, and collaborating with educators and non-profit organizations to create a curriculum or discussion guide around the content of the film. Kalim is currently working on another feature length doc about a long-established homeless encampment, a tent city in NJ that is facing eviction by the town where it’s located. It’s called “In The Woods” and the website is Inthewoodsdocumentary.com.

Melissa and Kalim’s film, “The Pass It On Project” will have its Brooklyn debut screening with the Filmwax Film Series on Saturday, February 4th at 6 PM.  The event will take place at The Brooklyn Society for Ethical Culture, 53 Propsect Park West & 2nd Street in Park Slope.  No admission.