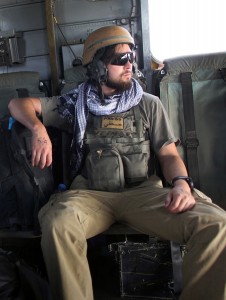 Danfung Dennis is a photojournalist whose work has appeared in The New York Times, Time and Newsweek, to name a few. With “Hell and Back Again”, a documentary that follows a Marine sergeant from combat in Afghanistan to his transition back to North Carolina, Dennis makes his debut as a filmmaker.

Adam Schartoff, P.O.V.: How long have you been a war photographer?

Danfung Dennis, director of “Hell and Back Again”: My dad gave me my first camera when I was 13. I had studied applied economics in school but made an abrupt change to photography. I started woking in 2005 as a photojournalist. I still remember opening the book Inferno by James Nachtwey. The images were photos he shot in various conflicts over a period of 30 years. It seared into my consciousness. He was bearing witness, showing the mistakes we were making and reminding us not to repeat them. Shooting these inhumanities was a moral act on his part — images could impact people and change how they think.

Schartoff: When did you get the idea to start making documentaries?

Dennis: After a few years I felt my work wasn’t really having any impact. I felt that as a society we’ve become so inundated with still images, that they weren’t having the same impact they once did. So I wanted to take the same ideas that still images had but bring it to the new medium of filmmaking. So I brought a Canon 5D, began shooting high-quality video. I wanted to meld the ethics and methods of photojournalism with documentary filmmaking — to be an observer and let events unfold in front of the lens.

Schartoff: What kind of impact did the death of Tim Hetherington (“Restrepo”) have on you?

Dennis: Tim was an inspirational figure. He was our prince. He pioneered storytelling in so many ways. And he pushed the boundaries of film and in media in general. He was so artful in the way he made mass communication. He really inspired me and his loss was deeply, deeply saddening. In my own small way, I hope to continue his work and to honor his legacy. 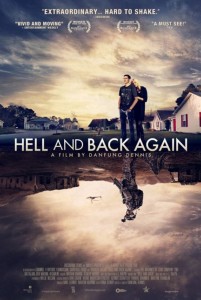 Schartoff: The film is definitely not pedantic in any way but you still can’t help but read the anti-war message. Did you ever discuss the tone with Sgt. Harris?

Dennis: We actually never talked about politics. I think it’s this unspoken rule among soldiers. They were there to be professionals and to execute their orders. You’re fighting for the men around you and so you can get home. The bigger picture never came up. I never sat down with Nathan about what he thought of the war, or the film for that matter. He never saw any footage until it was finished. He trusted me to tell his story.

Schartoff: And what was your way in to “Hell and Back Again”?

Dennis: In 2009 I was embedded with the Echo Company during a very large offensive. This was a key operation to break the military stalemate that we had reached in Afghanistan. Echo Company was dropped behind enemy lines, and shortly after landing they were surrounded and attacked on all sides. The fighting was mainly focused around this pile of rubble which became known as Machine Gun Hill. That was the first day and one Marine was killed, and others collapsed from exhaustion. It was at that time when I met Sgt. Nathan Harris.

Schartoff: What were your initial thoughts about Sgt. Harris?

Dennis: I could see that he was an exceptional leader. He was courageous and was at the very front of this operation, and he led his platoon further into the stronghold. I got to know him really well. We took cover behind the same mounds of earth… We learned to trust each other. About six months later, when the Marines were coming home and were coming off the buses…

Schartoff: He didn’t step off the bus.

Dennis: Yeah, I learned at this point that he was injured. I asked the guys what happened to Sgt. Harris and they told me he had been hit two weeks ago by a Taliban machine gun round during an ambush. So I called him up. He was just getting out of the hospital. He had gone through the surgeries and was in extreme pain. Yet he invited me back to his hometown in North Carolina. He introduced me to his wife, Ashley, his friends and family, as “this guy who was over there with me.” So I was instantly accepted by this rural Baptist community.

Schartoff: Did you live with them while you were filming?

Dennis: Yes. I lived with Nathan and Ashley during the recovery and the transition back into a community that had very little idea of what he had just been through. I think that transition was almost more difficult than what happened on the battlefield. So my story evolved from one about battlefield combat to one of personal struggle and coming home.

Schartoff: Critical and audience approval is a wonderful thing but nothing compares, I imagine, to the endorsement of your subject.

Dennis: When he did see it finally, it was with Ashley and myself. It was just the three of us in the theater. It was very difficult experience for them, very emotional. But when it finished and the lights came up, they just kept looking at each other and saying it was perfect. It was a big relief, yes. They felt it was an honest portrayal of what they had been through. His only critique that it was only 90 minutes.