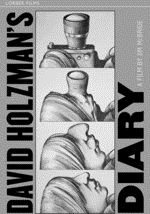 The classic mockumentary 1967 “David Holzman’s Diary” makes it debut on DVD and Blu-ray today.  It hasn’t been available in years accept on a couple of websites.  It had been my intention to show the film as part of the filmwax film series and so I looked up director Jim McBride to chat with him.  He gave me a generous amount of his time for the interview.  He’s had such an interesting career that I wanted to make sure I published the interview in its entirety.  Here’s Part 1 which primarily focuses on his early career and the making of “David Holzman’s Diary and its subsequent release.  Part 2 will focus on his Hollywood years.

Adam Schartoff: Congratulations on the DVD/Blu-ray release.  People will finally have the chance to see “David Holzman’s Diary”.  The movie has a new opportunity to reach a new audience.

Jim McBride: I guess.  Maybe it was better when no one saw it.

Schartoff:  That’s a little bit nihilistic almost.  I do understand that it played at MoMA for a week.

McBride:  Yes, but I wasn’t there.

Schartoff:  No?  Scheduling conflicts or its just not your thing?

McBride:  Well, no one offered to pay for my plane ticket.  Anyway, it’s not an issue because I was actually up in San Francisco.  The website Fandor was doing a screening.

Schartoff:  I was already somewhat familiar with them but it wasn’t until I was doing some research on your film where I came across Fandor again.  I ended up watching it on youtube.

Schartoff:  If there’s a worse way to watch it, I haven’t figured it out yet.  I tried to expand the player to full-screen and couldn’t even do that.  Funny enough, even before I knew that Kino-Lorber was releasing it, I had ordered a copy on VHS.

Schartoff:  There are many third party retailers that sell them through Amazon.  It’s easy to find them.   It’s handy to have a VCR for those rare instances.

McBride: [laughs] I don’t even have one.

Schartoff:  That’s my back-story.  I was trying to find a 35mm print for my film series but, alas, it’s not an option.

As far as I can tell, whether intentionally or not, you invented the mockumentary.  Are there any others prior to “David Holzman’s Diary”?  Am I wrong?

McBride:  You are wrong, actually. [laughs]  There was a film, it’s quite different, but we were linked for a while.  There was a filmmaker named Stanton Kaye and he made a film called “Georg” (1964) which had a similar kind of structure to it.  About a guy who was making a film about himself.  It was very different and very polemical.  But it had preceded “David Holzman’s Diary” by a few months.

Schartoff:  So you were making the films simultaneously.

McBride:  Actually I had made a version of the film the year before which I had done with other actors entirely and the print was stolen out of my car.  Then a year later we started up again with Kit Carson and Michael Wadleigh and all those people.

Schartoff:  So you had made an entirely other film beforehand?

McBride:  I had shot most of it.

McBride:  It had a different cast and was nowhere near as good a film.   It was good to have better people to work with the second time around, not to mention more experience.

Schartoff:  So, in the long run, it was to your benefit.

Schartoff:  It’s too bad more filmmakers haven’t had prints of their movies stolen out of their cars.

Schartoff:  Still, you hadn’t seen “Georg” before making your film, had you?

McBride:  I think I had.  It’s a little fuzzy in my mind right now.

Schartoff:  Well, I was alive in 1967 as well.  I’m proud to have been a little toddler when “Holzman’s Diary” came out.  When you finished the film we currently know, did you then self-distribute?  Did it play widely?

McBride:  Oh, no.  There was no sort of alternate distribution system in those days for independent films.  I didn’t really have any commercial intentions for the film in those days.   I thought I’d make a film and then show people I could make a film.  Use it to get someone to hire me.

I did rent a screening room and showed it to a bunch of people.  One of them was the representative from the Manheim Film Festival in Germany.  He brought it over there and it ultimately won the grand prize.  It got a lot of attention in Europe.  It played in other film festivals, enjoyed a small release in France.

But it was never released here in The States.  During the next few years there were all sorts of people trying to come up with alternate distribution systems and I got involved in several of them.  One of them wanted to release the film theatrically but felt the film wasn’t long enough.  So they offered to give me $10,000 to make a 10 or 15 minute short that would play with it.  So, I gave it a shot.

It just happened that I had just met a girl.  She was English and had recently come over and sort of wanted to join the revolution.  She had arranged to get married to a yippie in order to get her green card.  That was before we had met.   I had been married and was separated from my first wife at the time.  The short of it is that I made a film about this girl getting married to this other guy which was called “My Girlfriend’s Wedding” (1969).

Schartoff:  You’ll be glad to know that that too is available on youtube, cut up into myriad pieces.  But correct me if I’m wrong, “My Girlfriend’s Wedding” turned out being almost as long as “David Holzman’s Diary”.

McBride:  Yes, it turned out to be an hour long.  It didn’t matter because the company was defunct before we got that far anyway. [laughs]  The story of my life.

Schartoff:  Well, the movie ended up doing what you originally intended, no?  It became a reel for you since you ended up getting some commercial work out of it.

Finally, in the mid-70’s I began to see diminishing returns in the New York independent film world and realized that if I wanted to make movies, I’d have to come out to Los Angeles.  So I did but it was another 5 years until I did and that movie was “Breathless” (1983).  [to be continued!]