Doug Block is a distinct type of documentary filmmaker—the subjects in his last few films have been those closest in his life: his family. From “Home Page” to “51 Birch Street” and now with his recently released “The Kids Grow Up”, he’s tackled the complex issues of being both a son and a father, and of growing up and letting go.

We sat with Doug over BLTs at a sandwich shop around the corner from his office in DUMBO, a Brooklyn neighborhood home to many filmmakers, musicians and new technology types. Much like the subjects in his films, Doug was extremely open about his experiences making The Kids Grow Up and the unique relationship he has with his daughter, Lucy.

Tribeca: It appears that you had to deal with a fair amount of resentment from your daughter Lucy. How did you deal with the dual roles of both filmmaker and father throughout that period?

Doug Block: It didn’t come up that much during the year, because I didn’t shoot a lot; it was really that last week. Lucy was really stressed out about leaving [for her freshman year of college]. My own theory is that if we hadn’t argued over my filming, it would’ve been something else. She would’ve accused me of not being there for her in another way.

Tribeca: So the camera wasn’t constantly in her face then. Clearly she was comfortable most of the time, but there were moments when she appears clearly upset.

Doug Block: There were moments when she would say, “Oh, Dad, turn the camera off, you don’t want me all pissed off at you.” Those times, it was kind of half bantering. But when she broke down in tears (towards the end), that scene was hard. That was the first time I realized, oh my God, she is deeply upset with me now.

Tribeca: Moments like that must have created conflict between your role as father and as filmmaker.

Doug Block: Absolutely. At that moment I described I was thinking this could just be a thing today that she is feeling and will blow over like so many of our upsets do. What do I do? Do I keep filming? Do I stop? We have all these important shots still to do. I have to shoot her packing for college, leaving the apartment; we have to say goodbye to her on campus—I can’t stop now! But I have to stop now. All this stuff is going through my mind. 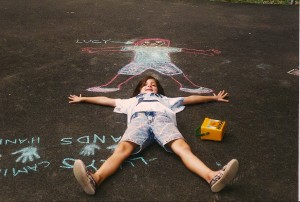 But if they don’t press me on turning off the camera, then I generally keep rolling, knowing we can always handle it in the editing room. If I went too far, then I won’t use it. And the camera always had the red light on, so Lucy always knew when I was filming.

Tribeca: Is there any difference between filming your family and other subjects?

Doug Block: It’s not like I treat my family all that differently than any other subjects that I film. There’s a certain etiquette. I try not to people make look bad. I let them know when I’m filming. I don’t try and surprise or ambush them. Obviously this is somewhat different because Lucy is my daughter and I’m protective. And I’m putting her in a vulnerable position, and I feel a bit guilty about that. On the other hand, I know she’s going to come off really well in the film. I always knew. There’s no way I can even make her look bad. In fact, if anything, I might have gone too far in making myself look bad as a way of protecting Lucy. And generally, most people understand that, though there are some people who think I come off as a bit of a jerk. That’s fine, too, because I am. Admittedly.

Tribeca: Even though you’re behind the camera, you are very much part of the story. You’re not worried about how you’re perceived as a father?

Doug Block: I’m trying to bring you into the world of someone in conflict, someone who is trying to figure things out and [who is] not quite on top of the situation. At times comically; other times, absolutely not. That’s always the trick, navigating the tone—when to go from humor to serious and back again. 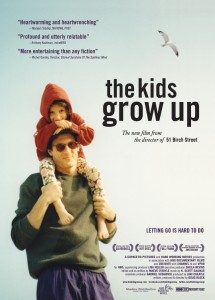 Tribeca: That’s the job of the storyteller. Frederick Wiseman, the legendary documentary filmmaker, has spoken about how he goes out of his way to demystify the film making process for his subjects, so they get to that unselfconscious place that much sooner.

Doug Block: He’s absolutely right. When I was working as a cameraman, I would say that at least 50% of my job was trying to get people to act naturally and comfortably with this stranger who had this big machine recording their every move. Making them feel it’s no big deal, engaging them in conversation, letting them see through the lens, whatever it takes. When it comes to shooting my family, usually they’d give me one dirty look at the beginning and then forget I’m there.

The Kids Grow Up is now playing in LA at the Laemmle Sunset 5. Check out the official site for details on other cities. You can also check out “The Kids Grow Up” on Facebook, or save it to your Netflix queue.