“The White Ribbon” is the latest film directed by Michael Haneke, one of Europe’s most highly regarded directors. The film has already won the Palme D’Or at Cannes, an honor that has even impressed the typically nonplussed Haneke. As of this week the movie has also won the Golden Globe for best foreign film. The White Ribbon tells the story of a series of violent and unexplainable incidents in a small German village on the eve of World War I. The film was shot by fellow Austrian Christian Berger who has collaborated with Haneke on several prior films including “Benny’s Video”, “Cache”, and “The Piano Teacher”. The new film, shot in a lush black and white, has a very distinctive look, which is why the cinematographer has been dispatched to help publicize the film.

Mr. Berger was in New York City to receive an award from The New York Film Critics Circle for his work on “The White Ribbon”. I had the pleasure to sit with the celebrated cinematographer at the Regency Hotel a few hours before the ceremony to discuss that film, his work with friend and director Michael Haneke, and anything else that came to mind.

Adam Schartoff: Can you describe the earlier years prior to your collaboration with Michael Haneke?

Christian Berger: I started as an assistant on the set, then went into news gathering; everything was in black and white then. I grew up with black and white in the end of the 60s and into the 70s in 16mm. Then towards the end of the 70s everything went to video. At that point I started working on a lot of TV plays and documentaries which I still do and love. I think it’s a very important counterpart for the [narrative feature]. Then I did my own feature films, three of them. Around 1990 I thought that enough was enough; I preferred to focus on the camera as my main thing. I created my own lighting system, having had bad experiences in the past with what you find in the field. With this lighting system, it gave the actors and directors freedom on the set; they would no longer be under technical dictate, which I hate.

AS: And that all changed when you started working with Haneke.

Berger: I started this new lighting system during the making of “The Piano Teacher”. In the beginning of 2000 I started with self-built prototypes. To have a free set with no heat, no glare, or a reduced glare—some glare is inevitable. But it allowed the actors freedom. 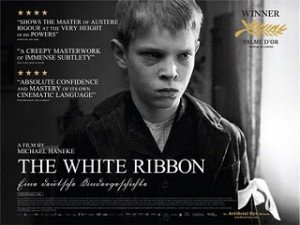 AS: Do you consider yourself a storyteller, even in the role as a cinematographer?

Berger: Not in connection with Haneke. He has a very remarkable and clear handwriting which I go along with. I have no problem with that. And I think he has the same feeling in regards to me because I think he saw the similarity as well. We were on the same level…

AS: What is that?

Berger: With tastes, with framing?

AS: It’s a number of things, right? You have to have compatible personalities as well as the type of cinematic vision.

Berger: I mean, he has his own idea, which is not mine, but I have respect for it. It’s his writing and he does so much preparation. He is very precise. You cannot improvise. He would hate it because he needs absolute control over every element. But I have a free hand over the lighting and the atmosphere as we discussed. He’ll say I need in that room one little oil lamp. And that’s it! And then the rest is up to me. And then, of course, there is the overall aesthetic of the film being in black and white. I planned it from the beginning.

AS: I went back and filled in all the gaps from Haneke’s films. I’ve seen pretty much everything now. In some cases I’ve been conscious of film making style, Cache as an example, but I felt with “The White Ribbon” the presence of a cinematographer. Shot in black of white, of course, with a very rich palette. Shot significantly outdoors, more so than in past collaborations.

Berger: Because it’s unusual. And it is a new kind of black and white quality. It’s been used recently for other films. “Good Night and Good Luck”, the Coen Brothers used the same technique for “The Man Who Wasn’t There”. I even got in touch with their cinematographer, Roger Deakins, to ask him about his experiences on the set and in the laboratory. So, it’s not a completely new technique but it’s another step on the digital side. That gives the impression of a new level of quality with black and white. No gain at all. Good contrasts. It’s closer to what you find with really good photographs. Prints.

AS: Unlike print photography, which is often spontaneous, this is all about preparation. Costumes, scenery, lighting….

Berger: Enormous preparation. A lot of tests. Especially for the costumes. You have so many colors that can turn out the same shade of gray, for instance. You have to test it. Or a very fine design can be a problem because, as you know… some things you can repair afterward, but preparation is crucial. You can repair things much more successfully than my older idols and colleagues like Sven Nyquist.

AS: Speaking of Sven Nyquist, there have been a lot of comparisons to his and Ingmar Bergman’s work. What is your reaction to that?

Berger: Well, we covered the same subjects, it’s true. Even with the role of the priest.

AS: Not to mention the role of the doctor. The scene with his midwife. It reminded me of one particular scene from “Scenes from a Marriage”, when he was berating her to the point where you wondered how she could take such abuse.

Berger: Well Bergman and Haneke both handled the same subject matter. We were not copying Bergman, at least not consciously [laughs].