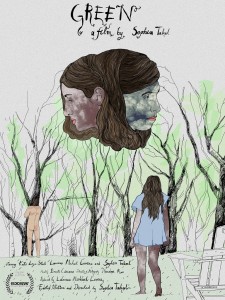 In the opening scene of filmmaker Sophia Takal’s fascinating debut feature “Green” some young New York hipster types have a ponderous discussion about author Philip Roth. Sebastian (Lawrence Michael Levine) insists that “even as a technician the guy’s amazing.” He teases his girlfriend Genevieve’s (Kate Lyn Sheil) ability to evaluate a Roth novel of which she’s only read thirty pages. No, she corrects him, she’s read all of it. The remainder of this short film (it times in at 72 minutes) concerns the emotional and intellectual dynamics of this couple, yet everything we will learn —or need to know— about their characters is revealed in this one brief exchange. Sebastian is very opinionated but he’s not a snob; he doesn’t take himself too seriously nor is he shy or hesitant in the way Genevieve is. She’s less outspoken but she’s as competitive as he is in her own way. They laugh and smile tenderly at each other during the hipster gab and trade shorthand looks and gestures; they’re obviously in love and comfortable with each other.

The next scene is a wide shot of the couple arriving at a house in the country. The location is never identified but with some observation one notes that all the cars have Pennsylvania plates. Takal employs these long exterior wide shots several times in a similar, mysterious fashion: we have to scan the frame–”where’s Waldo” style–for the origin of the voices we hear. The sound design by Weston Fonger is supple and rich. Nature and ambient sounds are combined with Ernesto Carcamo‘s spooky, almost sci-fi soundtrack (think of the soundscapes Giovanni Fusco created for Antonioni). Partnered with the lush, sylvan exteriors the film almost feels at times like a trippy, environmental installation. 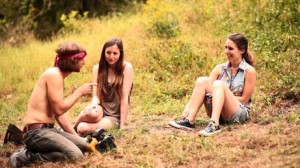 The story, even for a short feature, is minimal. The couple have rented a country house for several months while Sebastian works on a blog about sustainable gardening. A young local woman, Robin (played by director Takal), latches on to them for company. The couple are sometimes annoyed and other times charmed by the unsophisticated Robin. She has a dog named “Hamburger” and asks silly questions like “Is he [Sebastian] growing his hair out for a reason?” in a rural accent that is not entirely convincing. Small matter that, because Takal and the other two actors give splendid performances. The three of them take walks in the forest and talk like overripe children. Often there is very little drama or cleverness to the conversation; this is dialogue as bird songs, not just mumblecore ramblings. Takal has created something very special here. The film’s title refers to the envy Genevieve  embodies as she eventually worries that Robin (note the bird name) and Sebastian may be falling for each other.  The title also refers to the greenness of the natural setting, but also signals the impressionistic intent of a film in which the total visual and sound field is often more compelling than any individual being or event captured within.

When confronted, Sebastian says that other women are just “fuzzy blurs” to him. And blurring is a key visual trope here. In one shot, a blurred-out Sebastian is typing away in the foreground as Genevieve sits reading in the background. As she approaches there is a rack focus that only slightly brings her boyfriend back into focus. Cutaways to nature shots frequently alternate the focus from one plane to another–blurring the leaves, then blurring the leaves behind them. When Genevieve fantasizes that her lover and Robin are having sex these sex scenes go in and out of focus in edenic, outdoor settings. Robin and Genevieve look a bit like each other and the doppelganger theme —alluded to in the film’s poster— is at play here too, but the shifting planes angle is more interesting. Space is important to the narrative of this film in a way few conventional films are. 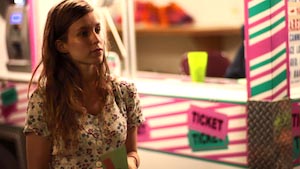 At one point Robin asks Genevieve what she is reading to which she responds “Just a book by George Bataille.” It’s a class joke; as if Robin would know the French creator of such perverse surrealist works as “Story of the Eye”! But it’s an apt name-check, too. Takal, especially in the film’s controversial ending —one sure to polarize audiences— is employing the kind of provocations usually associated with writers like Roth, Bataille and Mailer. And Levine and Takal are a couple in real life; Levine directed “Gabi on the Roof in July” and also acted in Onur Tukel’s very funny “Richard’s Wedding.” Let’s hope we see more features from these extraordinarily ambitious two. To paraphrase Sebastian on Roth, “Even as a technician, Takal’s already kind of amazing.”

Opens Friday, September 7th at Rerun Theater in DUMBO and at Facets in Chicago.