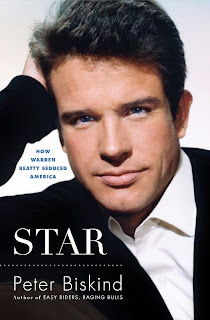 I just finished the Peter Biskind bio of Warren Beatty, Star. It was very entertaining and basically ran through the actor/producer’s professional life. The point certainly came across that he was a visionary and that he was quite lucky to come along at the time when he did. But as the business grew more bottom line oriented, there was less patience for his style of film making. That approach was to make productions last as long as they needed and take hundreds of takes in order get the right footage. A good money spender. And in a few cases he made some brilliant movies. The period from Bonnie and Clyde, Shampoo and Heaven Can Wait is often considered his golden period. And I loved all three of those movies. I personally would add Reds to the list. I actually saw both Heaven Can Wait and Reds in the theater. I remember being completely transported as a teenager watching Heaven Can Wait thinking, this is the best movie I’ve ever seen. It made me a fan of Beatty’s though it would be years before I was aware of Bonnie and Clyde. Shampoo, on the other hand, was already infamous film making and I was too young to have an opportunity to see it when it was out or even when it first came to VHS.

Reds (1981) I saw during a break in my freshman year at Bard. I remember meeting up with Judy Harkavy who lived in Poughkeepsie and seeing it with her, maybe in New Paltz? I remember her dozing off and not be much impressed. Especially since it was almost four hours long and included an intermission. I, on the other hand, even at the ripe age of 18 was totally blown away. But I was a movie geek even then. I was also reading Jerzy Kosinski novels back then, go figure. And I didn’t know what he looked like since his photo was not on the back cover my copy of The Painted Bird or Being There. I didn’t know what he looked for but he played Grigory Zinoviev and was a totally natural actor. Also, Jack Nicholson, in what might be his last subdued performance, was magnificent as Eugene O’Neill, another literary hero of mine back then. 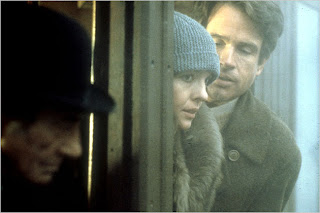 After that, well, things were never quite so great. I skipped Ishtar –more on that later– but went to see Dick Tracy and Bugsy when those films came out. I don’t remember being impressed with either one of those movies, thinking this is Warren Beatty’s vehicle stage. Before it was story concepts, now it was leading role concepts. He could no longer glide just on good scripts but actually needed to boost his persona with larger than life characters and huge budgets. Both movies did poorly at the box office, although Dick Tracy did reasonably well. I believe Bugsy was up for many Oscars but won almost nothing. Bulworth was a return to form in my opinion. Here was Warren Beatty stepping out of his comfort zone, or his primary audience’s, and really trying something more daring. I saw this when I was in a bi-racial relationship and was already contemplating the relationships between blacks and whites in the country. I was already dealing with some of the political themes that the movie dealt with and so I was fairly turned on by the movie. And it had the added bonus of also having Halle Berry, Oliver Platt and Don Cheadle in the cast. Beatty finally dispensed with surrounding himself with old friends like Goldie Hawn, Charles Grodin, Buck Henry and even Al Pacino. 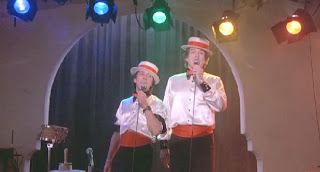 That was really it for Beatty. He mailed in Love Affair within which he co-starred with his new wife, Annette Benning, who he met while filming Bugsy. She’s got chops. I have to say while I don’t remember her performance in The Grifters, she blew me away with her role as Carolyn Burnham in American Beauty (1999) and was magnificent in Mother and Child (2010). I finally got to meet her at the press day for the latter movie. So Love Affair died with a thud, even with the casting of Katherine Hepburn, poor thing. But that was a masterpiece compared to Beatty’s last movie, Town & Country. It’s really one of the worst pieces of crap I’ve ever watched. Like Ishtar, it was a tremendous failure, and probably ended Beatty’s ability to ever get another movie made with his name attached to it. Then again, the actor is heading into his mid-70’s. Other than a Jack Nicholson or Clint Eastwood, who could? 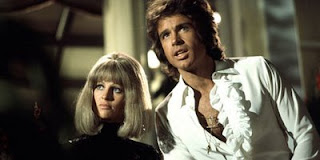 I missed both Town & Country and Ishtar when they came out. I finally watched them both online. Town & Country was on Netflix’s website while I saw Ishtar on youtube.com. Both were really bad but as a songwriter, I kind of liked the New York scenes with Beatty and Dustin Hoffman (fresh off Tootsie I might add), as their friendship blossoms. Right before they go to the Middle East, Dustin Hoffman has a suicide on the ledge scene. I’m thinking to myself… “really, this was the best thing Elaine May could come up with”? They should’ve both jumped and saved us the embarrassment of watching them slaughter a movie for another hour. The other clever thing about Ishtar was making Hoffman the stud and Beatty the galoot. It was a great idea and Beatty, to his credit, is very good at the part. In fact, I’d say he was never funnier. Once again, Beatty has never been particularly funny but has had snappy scripts –most of which he takes credit for and did not write– and surrounds himself with funny people. Again, Buck Henry, Charles Grodin, Goldie Hawn… these people were funny in their day.

Town & Country? There’s just nothing to be said about this movie. There’s nothing funny about it. Beatty butchered what might have been a decent satire in the vain of George Cukor comedies. But Beatty comes off as a complete cad. He and Diane Keaton –back for the first time since Reds– play a wealthy aging couple from the Upper East Side. He’s an architect who doesn’t ever seem to work and she’s a fabric designer. And they have two beautiful children who are dating ethnic stereotypes and who fuck their young adult children who still love at home. Anyway, Beatty for no apparent reason decides to go and have sex with a cellist played by Nastassja Kinski (Klaus is still rolling over in his grave). His good friend, played by Garry Shandling (who must remind Beatty of his other comic menschkeit friends of yore) is having an affair with what everyone thinks is a slinky red head but is in fact a man. And who is he cuckolding but Goldie Hawn who is supposed to be Beatty’s best friend. Did I mention that Beatty goes off with Hawn’s character to a property she and Shandling share in Mississippi, in order to provide aid and comfort. This was encouraged by Keaton, no less. So they fly down to the Delta and end up –Surprise!– fucking. And then this comedy of errors which is already an error of comedy just sinks further and further down. Shandling and Beatty go off to Sun Valley, Idaho to share some man time. Mind you, Beatty still doesn’t even know that Shandling is gay. It all ends horrifically terribly with a quasi-Alzheimer ridden Chuck Heston blowing up Shandling’s log cabin. It’s all just so awful. And this is the same Warren Beatty who brought us Reds and Shampoo? Just a sad thing. 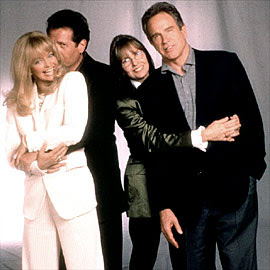 My final hope is that Beatty comes back for one more film where he saves his reputation and doesn’t leave on that sad note. He certainly could do it. He’s still great looking, commanding, has his faculties. If his vanity can manage it, he could play an elder statesman of some kind or other. Perhaps a grandfather. Not some embarrassing role where’s he’s chasing tale at his advanced age. To their credit, even Redford and Nicholson have stopped doing that.