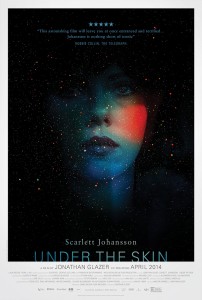 Comedian Todd Barry used to joke that the one thing he learned on the Internet was that “‘Donnie Darko” is the greatest film ever made. If I was a teenager right now I’d be tweeting the same thing about Jonathan Glazer’s new film “Under the Skin.” Years later I might be embarrassed by my hyperbolic outburst but not by my enthusiasm. This film rewards those who are willing to watch it with the kind of immersive attention it invites and cultivates. It provides a stunning re-education of the senses; it’s mysterious, scary, and beyond good and evil.

The film is based on a cult science fiction novel of the same name, written by Michael Faber. The story is about an alien creature played by Scarlett Johansson who cruises the streets of Glasgow, luring young single men into her van initially with her charm and then with her lithe, nude body into a pool of amniotic black fluid. Glazer uses a technique in these sequences that adds to the creepiness: many of these scenes were shot with hidden cameras while Johannsson drove around, approaching these unsuspecting Scottish lads for help.

The novel provides more explanation for this: she’s harvesting flesh for her home planet, but Glazer (and co-scenarist Walter Campbell) chose to keep the story much more ambiguous. Johannsson, clad in a stone-washed jeans and a fake fur coat, is so good at making us see how an alien being might make sense of the world you may leave the theater and start stumbling into people. There are many layers of estrangement. Johansson’s unnamed character has somehow learned to speak English with a London accent —the opening scene features the sound of what might be her verbal drills— but she is just as confused by the Scottish phonology of her prey as many of us are. “Come to me!” she tells her victims, weirdly accentuating the last word. A chance encounter with a girl who claims to have seen her before prompts a stunning visualization of the intense pattern-matching an android might employ to respond to such a query. It’s very brave of Glazer and Johansson to create a character who portrays no emotions but creates extreme emotion in the spectator’s mind.

If you’ve seen any of Glazer’s music videos for musical artist including Radiohead, you’ll recognize his fascination with paranoid androids. He’s obviously a huge fan of Nicholas Roeg’s “The Man Who Fell to Earth” but this has none of that film’s satire or humor; here the focus is on compelling atmospherics and a sinister meditation on how an untutored eye might experience the world, and how any being can learn what is now called empathic concern.

In one shocking scene set on the violent Scottish sea shore she watches passively as successive members of a family drown, each trying to save the other. This scene unfolds like a tragic fable as she watches it calmly, trying to fathom what is going on. Her response is to go about her business; she brains one of the survivors with a stone (the way you’d kill a fish) and adds him to her collection.

Young U.K. composer Mica Levi’s frightening soundtrack is also a masterwork, even when appreciated separately from the film. Daniel Landin’s photography is excellent, too. There are some dark landscapes that challenge everything you’ve ever thought about how such scenes should be lit.

For adventurous filmgoers of my generation (I’m about the same age as Glazer), directors like Kubrick, Tarkovsky and Roeg challenged us to think in visionary terms. Superheroes, fantasy and gore have taken the place of cerebral sci-fi these days in an era that is, let’s face it, ruled by fear and snark. Have you seen that deplorable Cadillac ad espousing the virtues of American exceptionalism? I’d love to see this bold new vision put a dent in that. 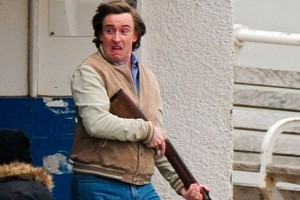