New York Film Festival 50: Pi and Kubrick in the Sky 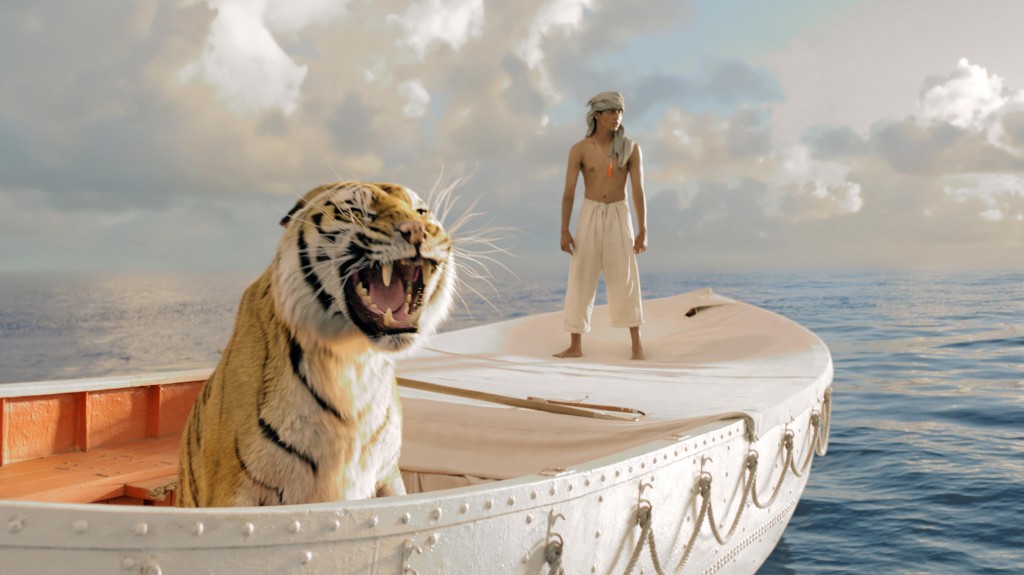 The opening night film for this year’s New York Film Festival presented the world premiere of “Life of Pi“, Ang Lee’s adaptation of the beloved 2001 novel by Canadian writer Yann Martell. Introducing the press screening, Lee joked that this project violated all three of the things directors are warned against working with–children, animals, water–add a fourth one, he shot it in 3D. He also noted that it was a challenge for him to make a film about faith. “Life of Pi” is about a boy (Pi, short for Piscine) from India, played by 19-year-old newcomer Suraj Sharma, who is so curious about religion he practices three of them. His father owns the animals in a zoo,  and in one harrowing scene Pi’s father teaches the young boy why he should not be sentimental about animals. Bad times force the family to sail to Canada, along with their animals (which they’ve sold to North American buyers.) A shipwreck puts Pi and a fierce Bengal tiger (named Richard Parker) into a lifeboat together. 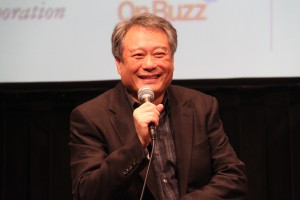 The bulk of the film is taken up by Pi’s 200-plus days adrift, trying to keep himself and the tiger alive. The difficulty filming these scenes is what made the novel seem un-adaptable for years but Lee and crew have succeeded brilliantly. Never, for one second–for example–did I believe that the Richard Parker on screen wasn’t a real tiger. (The tiger, in fact, turns in one of the best performances you will see this year!) I’m no fan of 3D, especially since I wear glasses and two pair of lenses make it difficult to watch 3D; the 3D is as good as it gets here but I think the film would be just as visually awe-inspiring in 2D. The scenes of Pi’s inventiveness as he figures out how to keep the tiger at bay and gradually establish a mutual existence are captivating. Occasional fantasy sequences illustrating Pi’s longing for others are poetic and visually stunning.

Unfortunately the weak wraparound story of a grown-up Pi recounting his adventure to a writer and Yartell’s theme of how faith is tested threaten to turn the adventure narrative into some kind of new age morality play. There is also a post-rescue bit about Pi presenting two versions of his story to Japanese insurance investigators that is almost a thematic cousin to the ending of Ford’s “The Man Who Killed Liberty Valence”: “Having to choose between the truth and legend, print the legend.”

In the end, no matter what Martel or Lee wants us to feel most strongly about in this film, I suspect that for many viewers, like me, it will be the interaction between Pi and Richard Parker. Not what it represents allegorically, but just the story itself as depicted here. It has something to do with the relationship between humans and other species: fear turned into respect and caution; the necessary imposition of hierarchy and territoriality in certain situations; and the ultimate acceptance of the impossibility of ever totally bridging the gap between us and other animals. If the subject of Werner Herzog’s “Grizzly Man” had seen this movie, he might still be alive today. 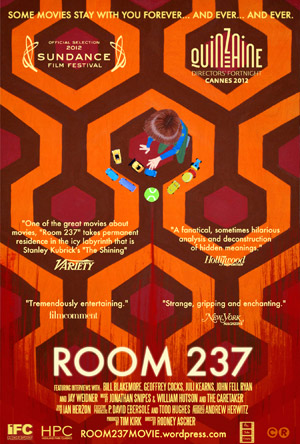 Rodney Ascher’s “Room 237” is the most entertaining documentary about a movie I’ve ever seen. I don’t recommend watching it unless you’ve already seen Stanley Kubrick’s “The Shining,” and not just because it will spoil the ending for you. “Room 237” is about the wealth of sometimes fascinating, othertimes kooky interpretations of Kubrick’s horror masterpiece. Five non-professional film scholars narrate (you never see their faces) as Ascher serves up scenes from the 1980 film and other material to illustrate their various theories: it’s about–among other things–the genocide of the American Indians, the Holocaust and even Kubrick’s rumored secret work for NASA faking the Apollo 11 landing. (The doc also features a fun musical soundtrack.)

Some observations drew laughs from the screening I attended, as viewers acknowledged that, no, they did not see the similarity between a skier in a poster to a minotaur, or notice a subliminal frame of Kubrick inter-cut into a shot of the sky. Most fascinating, though, are the close readings of the treatment of space in the film’s main location, the Overlook Hotel (built on a British sound stage). One theorist has created detailed maps of the hotel, based on the viewer’s experience of the film, not production sketches, that suggest that “The Shining” is as much a space odyssey as “2001” was. We know Kubrick was a total production design wonk, so clues based on patterns in the rugs and odd continuity errors do resonate. Meanwhile, a projection of the film simultaneously in forward and backwards motion (presented at Brooklyn’s own Spectacle Theater) is inspired madness. I’m sure Kubrick would have loved this–he encouraged the interpretation industry his great films inspired. “The Shining” is a fascinating maze to be lost in and “Room 237” is a good companion for your time spent there. Opens in theaters next March.

I’m a long time fan of Democracy Now! so I’m glad to report that “Harvest of Empire“, an important new documentary based on co-anchor Juan Gonzalez’s book of the same name, is currently playing at New York’s Quad Cinema until October 11. It dispels many myths about immigrant latinos by documenting the American foreign and economic policies which helped to force increasing numbers of Mexicans and Central Americans to flee their native countries. Narrated by Gonzalez and others, many of whom were “illegals” who went on to become citizens and give very much back to the U.S. Highly recommended.

Next time: more on De Palma’s “Passion” (I didn’t make it to a second screening and just as well–a digital projector malfunction cancelled it! I’ll try again next week); also, Miguel Gomes’ “Tabu,” Olivier Assayas’ “Something in the Airv,” Lee Daniels’ “The Paperboy” and Cristian Mungiu’s “Beyond The Hills.” If you like “Room 237” you’ll want to seek out the BBC 4 documentary “Stanley Kubrick’s Boxes,” a fascinating behind-the-scenes look at the production materials he saved. It’s not on DVD or Netflix yet but it sometimes pops up on the Sundance Channel or youtube.