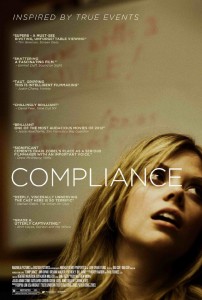 True story.  I recently heard a young woman —shaken, on the verge of tears— tell some friends about how her thuggish bar manager accused her and a co-worker of theft the night before. After the place closed, he locked the door and wouldn’t let them leave until one of them confessed. Frustrated when both pleaded their innocence until early in the morning, he fired both of them. “Can he do that?” she asked. No, he can’t. It’s called illegal imprisonment. And he probably broke any number of labor laws as well. The susceptibility of people who don’t know their legal rights, of underpaid workers afraid of losing their job, and our ingrained fear of and deference to authority–this is at the heart of Craig Zobel’s brilliant film “Compliance.” It is easily the most radical American film of the year.

Ostensibly a thriller, the story is very simple. On a busy Friday night at an Ohio fast food restaurant called ChickWich, middle-aged manager Sandra (Ann Dowd) receives a call from a police officer telling her that one of her employees, Becky (Dreama Walker) is suspected of theft. Sandra diligently follows the policeman’s instructions, taking Becky to the back, questioning her, subjecting her to a strip search, even asking her construction worker fiance Van (Bill Camp) to help as she juggles the demands of the front counter and the man on the phone. We know the caller (Pat Healy) is a sadistic prankster, trying to see how far he can push people beyond their ethical boundaries. It’s easy to think we’d catch on quickly if this happened to us, yet this is inspired by a real incident, one of 70 such pranks that happened over a decade. (For a fascinating document of them, see the Wikipedia page on the “strip search prank call scam.”)

When “Compliance” premiered at Sundance earlier this year, some viewers walked out, questioning the authenticity of such an incident or Zobel’s intentions. Since it’s based very closely on one of the actual prank calls, the question should be: does the film make it seem believable? I think it does, because the writing and acting is so good; Dowd and Walker are both terrific. And despite requiring Dreama Walker to be nude in some scenes, the film is not exploitative. It is, however, about exploitation. The fake policeman (Pat Healy) uses the type of confusing, button-pushing discourse real policemen sometimes use to get you to say and do things your lawyer would advise against.

Zobel and Director of Photography Adam Stone instill what is almost a one-set film with a sense of uncanny tension. In an early interrogation scene, the camera moves up and down, perfectly parallel to the scene in a manner that suggests the emotional nausea Becky must be suffering. A shot of Sandra taking Becky’s clothes to her car in the parking lot is filmed in a single long shot, accompanied by cellist Heather McIntosh’s haunting score. A later scene of a real detective driving to the restaurant is done the same way, this time to reinforce the fact that all along the police station was only a half-mile away. Only his second feature (2007’s “Great Wall of Sound” was the first), this is impressive filmmaking.

The timing of this release couldn’t be more fortuitous: on the eve of an election in which candidates boast of being “pro-business” (that often being code language for wanting to nullify the historic gains of the American labor movement); in a time when our civil liberties are being eroded and surveillance of our daily lives grows in the name of “home security”; when income disparity and poverty are at such historic levels that workers are more fearful than ever to assert their legal rights. Corporations often require employees to sign what’s called a “compliance agreement.” They ought to also have them watch this film. (Opens Friday, August 17)