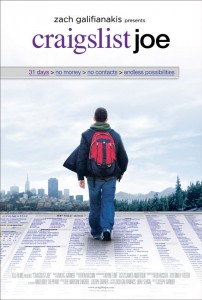 Every morning, Justin, a young Chicago man juggling dozens of part-time jobs and activities, goes on Craigslist and follows the same routine. First he checks the “personals: strictly platonic: women seeking men” section. Then he goes to “jobs: general labor” and clicks on “Transport” and “ETC.” Within the “Gigs” section, he browses listings in “labor”, “event,” “crew,” “domestic” and “talent.” Finally he heads over to the “pets” section in “community.” Justin is one of the self-described Craigslist addicts whom filmmaker Joe Garner meets on a journey to see if the free, online forum begun seventeen years ago is actually enabling a sense of community for its users. “I’m going to use technology,” Joe declares, “the very thing that is supposed to be isolating us — to connect with others.”

His mission?  For one month he will have no access to money, friends or family, carrying with him only a laptop, cellphone, passport and toothbrush. He will rely totally on Craigslist to find food, shelter, rides and company. Sure, some might suggest that a  healthy, young, attractive white male pretending to be homeless for a month is not the riskiest example of participatory journalism. And then there is the matter that he is being accompanied the whole while by a camera man (Kevin Flint) whom he also found on Craigslist. Still, it’s an interesting idea and Garner is an earnest, genial pathfinder. A boyish 29-year-old (he looks a bit like Kevin Connolly of “Entourage”), he’s good at staying in the the background and letting people tell their stories. 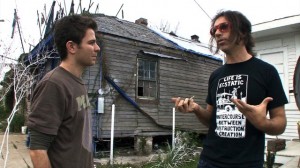 Now, if Joe were to have just spent 31 days couch-surfing in one place he wouldn’t be accomplishing anything more remarkable than what many Williamsburg hipsters do month after month. So after a couple days in his native Los Angeles, he finds a ride to Portland, then to Chicago, New York, New Orleans (with a troubling visit to the flood-ravaged Ninth Ward) and San Francisco, where he is invited to meet Craig Newmark, the founder of Craigslist. Along the way Joe is welcomed into the homes and businesses of dozens of ‘list users. A middle-aged new age woman intones dramatically as Joe holds huge crystals under a conductive metal structure. An Iraqi-American family talks about their sadness upon having their loyalty questioned after 9/11. A girl he meets at a free break-dancing class offers him a floor to sleep on and turns out to be a dominatrix. (“I’m going to sleep with my cup on tonight,” Joe says to the camera.) In the most poignant sequence, Joe helps a former actress turned obsessive hoarder who’s suffering from cancer, clear some space in her tragically small New York apartment.

Though Joe’s admirable mission is finally accomplished, his film is sometimes less successful. While there are many great scenes, some of the folks he meets on his pilgrimage are dispatched with a tiresome hello and goodbye suggesting either he didn’t film or didn’t get clearance by the participants. And let’s hope Joe’s taste in soundtrack music isn’t as distracting to you as it was for me. And yet this is still a special achievement. The mainstream media, suspicious of all decentralized channels of communication, would have you associate Craigslist with sexual deviants and serial killers. Leave it to Joe to demonstrate how useful the service is to millions of people, and to renew our faith in the power of community.

“Craigslist Joe” is current available for viewing on demand; check your local cable listings. Visit craigslistjoe.com for details about about special screenings.

If you liked “Craigslist Joe”, check out “No Impact Man” and “Fat, Sick and Nearly Dead“.