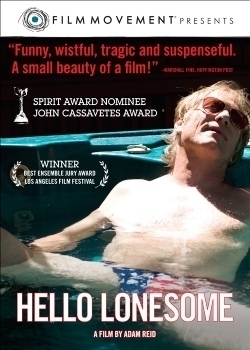 “Hello Lonesome” is Adam Reid’s charming triptych dramedy revolving around the theme of loneliness and human connection.  Plot #1 involves the voice over actor Harry Chase playing a voice over actor named Harry Chase, who works and lives alone in his comfortable rural Connecticut domicile. Coping poorly with an estrangement from his adult daughter (never seen), Harry passes the time in between his studio gigs playing with his big boy toys  which include a gun collection and a trampoline.  His only friend is the UPS guy (a terrific Kamel Boutros), who drops off supplies for Harry and humors him by hanging out longer than he should.  Plot #2 involves compulsive online gambler Gordon (Nate Smith) who falls in love with pretty Debby (Sabrina Lloyd).  Gordon ends up moving into Debby’s large but sparse Manhattan apartment which she shares with a pair of large dogs.  A bit of unexpected news ends up potentially undermining their future. Plot #3 plays up the age difference between widow, Eleonore (Lynn Cohen) and her much younger single neighbor (James Urbaniak) whom she reaches out to after her driver’s license is revoked.  What starts out as an occasional chauffeuring here and there, ends up going off into Harold & Maude territory.  Everyone in “Hello Lonesome” is terrific and pitch perfect.  The most fun is the audio commentary which stuffs too many of the cast members together with Reid’s wife feeding the cast throughout.  Nary a coherent thought is completed but you’ll still laugh and wish you had attended the recent DVD release party hosted by Filmwax.  Buy a copy now! 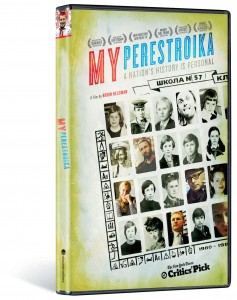 “My Perestroika” was one of the big documentary surprises last year.  Along with a handful of other non-fiction features (including Werner Herzog’s “Cave of Forgotten Dreams” and “Buck”) that actually had impact at the box office as well as a hit on POV.  Following 5 adults who all experienced growing up in the Soviet Union and then the subsequent transition of Glasnost and Perestroika, the movie is both funny and sad but always fascinating.  The DVD is packed with an hour’s worth of deleted scenes.  Anyone who watches the movie will be grateful for the bonus time with the movie’s subjects whom will all grow on them like married couple Borya and Lyuba who are trying to raise their son, Mark, amidst the chaos of the Russian culture.  Successful entrepreneur, Andrei, has profited very well while Rusian, a local musician, struggles to make ends meet.  And single mother, Olga, a former high school beauty, now punches the clock at a pool table rental company.  Yet, a real spark emanates from all of filmmaker Robin Hessman’s subjects.   The DVD is available for purchase using this link.