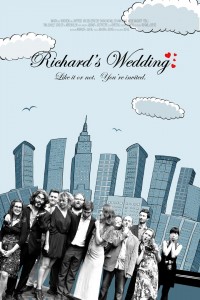 Word just in that Onur Tukel’s comedy, “Richard’s Wedding”, which was picked up by Matt Grady’s Factory 25, will be premiering at reRun Gatropub Theater on Friday, June 1.  The comedy about a ragtag group of friends getting together for a wedding in Central Park, shot at the end of last summer and stars Lawrence Michael Levine (“Gaby on the Roof in july”, “Green”), Jennifer Prediger (“Uncle Kent & the upcoming “Red Flag”), Dustin Defas (“Bad Fever”), Josephine Decker (“Autoerotic”, “Uncle Kent”), Randy Gambill (“Eastbound and Down”), Oona Mekas (“The Future”), myself &, of course, Onur Tukel.  Many from the cast & crew are expected to appear on opening night.  I hope to have a special episode of Filmwax Radio airing just prior.   More on that to come.