Interview with Michael Nyqvist: Getting Beneath the Surface 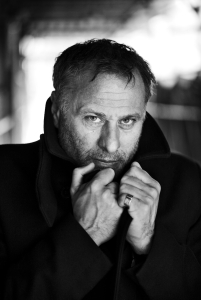 After an amazing string of successes playing Mikael Blomkvist in all 3 film adaptations of Stieg Larsson’s Millenium Trilogy, actor Michael Nyqvist finally has an opportunity to show some of his other work to a broader audience.  One such film, “Suddenly”, is playing in Eurocinema’s First Annual Scandinavian On Demand Film Festival, currently available.

Michael Nyqvist:  Wonderful.  Right now in Stockholm we’re in the peak of beautiful weather.  But between March and November, it gets pretty tough.

filmwax: This is one possible explanation of the history of such artists as Bergman, Strindberg, Ibsen, etc.  I was recently talking to Lena Endre [co-star of “The Millennium Trilogy”) about her film, “Limbo”, which is part of Eurocinema’s First Annual Scandinavian On Demand Film Festival.  You’re in another one of the films, “Suddenly”.

Nyqvist: Yes, it is.

filmwax: And you made “Suddenly” before “The Millennium Trilogy”, correct?

Nyqvist: Like four years ago or something.  It’s a work I’m pretty proud of.  The producer, director and I worked very close together.  We did another film after that called “Among Us”, and we plan to another film soon.  “Suddenly” is about sorrow and it’s a very Swedish film.  You can see the tracks from Bergman in it.  It’s traditional in that way.  The environment of the story is like a Bergman film.  It’s a fantastic island.  It’s middle class.  Everyone is supposed to be very happy and things are supposed to be very good, but it isn’t.

filmwax: Did you know when you were making “Suddenly” that your next production would be such a block buster, relatively speaking.

filmwax: When you read the script, did the similarities of your life strike you?  You have two children as well. 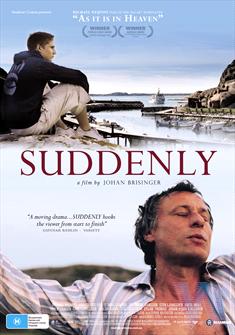 filmwax:  What did you make of Lasse’s tragedy?  What was the process of figuring out that character?

Nyqvist: Well, losing a kid is the worst nightmare.  It’s the worst thing you could think of, or your wife.  The film is about a father who couldn’t explain or communicate the subjects in life.  Emotions, whatever.   He didn’t have the language of doing that.

What’s challenging for me as an actor is to find things that I have a lack of understanding about in my own life but I begin to make more sense of it as I work through the character.
That’s what hooked me with this story.  I worked very closely with Johan [Johan Brisinger is the director]. It’s about getting to the subtext beneath the dialogue.  The characters always act polite and never say what’s really on their mind, never speaking what they really think or feel.  That’s how we approached this film.  The scenes between my son and I represent that best.  And how we try to crack the ice.  It’s not until the end until they become close.

filmwax: There was a lot of fear of what might result if the ice is cracked; the emotion and the pain can be terrifying.

Nyqvist: Right, like the scene in the hut when Lasse is in the hut and finds his son’s life vest.

filmwax: Yes, I knew he was going to break down there.  It was a catharsis.  I was ready for the tears.

Nyqvist: And it’s not even just tears.  The character had to cry out.  He just screamed.  It’s like chopping wood.  It’s not bending something, it’s cracking it open.

filmwax: Serious question:  were you contractually obligated to show your back side a certain number of times?

Nyqvist: I get this question a lot.  Yeah, well, the story is about bearing yourself on some level.  Normally when you are going through sorrow, you want to hide… but that’s the great thing about film.  You can show graphically and you don’t have to speak the words.  The audience feels gratified by what they see and connect to the story this way.  Bergman might have someone vomit over the table and then talk about God or something.

filmwax: Yes, SUDDENLY seems very minimalist on the surface but there’s a great deal going on underneath the surface. You see that more than it exists in the dialogue.  The film resolves well but doesn’t feel wrapped up neatly either.

Nykvist: Married couples renovating their homes and they divorce after it’s done.  They have problems but they don’t talk.  They’d rather fix things on the surface.

filmwax:  Has “Suddenly” played throughout Sweden?

filmwax:  Well, finally it will also play to American audiences now on demand.  Any thoughts about it playing through this emerging distribution method?

Nyqvist:  The first reaction is that I’m so happy.  I’m very proud of this film.  We have a tradition of making films like this in Sweden and Denmark.  The tradition of film there is so old.  Serious films.  What makes me excited is the opportunity for American audiences to see how Scandinavians deal with life.  There’s currently a lack of that in America.  It’s not a commercial film, it’s all about the story.  I would be very proud if the American audience embraces it.  American cinema has brought so much to us.

filmwax: Any thoughts that it will be playing right into their living rooms and bedrooms?  This is quickly becoming a major way American audiences are watching such character driven films as “Suddenly”.  As you may know, most art houses are in the major cities, mostly, and that a film like this may play one or two weeks, if it’s lucky.

Nyqvist:  I love it. I lived for a year in Omaha when I was 17.  I’ve been to The States many times.  But what I didn’t know is how different it is inland than from the coasts.  Not nearly as much culture.  If this film could get to those parts, then that’s fantastic.

filmwax: You’ve known for a while that the Americans are re-making “The Millennium Trilogy”.  No surprise there.  Have you been approached to play any role in that project?

Nyqvist:  No but my daughter is one short scene.  She plays a waitress, just by coincidence.  No, I haven’t but I am extremely curious to see it.

filmwax:  Are you able to walk around Stockholm discretely as a result of those films?

Nyqvist:  Well, before then I had some films of international success, so I was already use to being recognized.  Like being stared at or asking for autographs.  It’s the guided tours that follow the Stieg trilogy.  I’ve told the organization that they are not allowed to tell tourists where I live.   Anyway, I have a good life.  It’s like I was sitting in a wheel chair but you get used to.  I have more benefits from it.  I just wrapped two American films, by the way.  One is called “Abduction” and the other is “Mission Impossible 4”.

filmwax:  I take it you were the villain?

filmwax:  Of course. I guess you had a few scenes with Mr. Cruise.  How was that?

Nyqvist:  Yes, most of my scenes were with him. He is a great actor.  We really enjoyed working together.  He has the same enthusiasm that I do.  We surprised each other and had a lot fun.  Like 1 to 100 in a nanosecond!