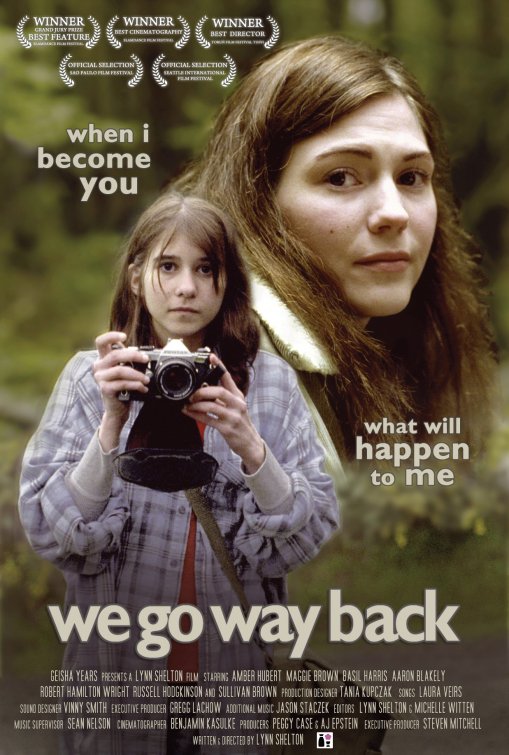 Before “My Effortless Brilliance” and “Hump Day”, there was a Lynn Shelton film languishing in distribution limbo for over five years.  Well, this past Friday night that movie, “We Go Way Back” was finally projected at the reRun Gastropub Theater in the Brooklyn neighborhood of DUMBO.  Ms. Shelton was present to introduce this, her first feature.  Also in attendance was Amber Hubert, who plays the lead role of Kate, and one of the film’s producers, A.J. Epstein.

The story concerns Kate, an actress living in Seattle, a smart and fetching young woman in her twenties but one who has been playing a passive role in her own life.  It’s around the time of her 23rd birthday that she is handed the lead in a local production of Hedda Gabler.  The play within the movie is presented in a parody, the director being something of a buffoon.  For one thing he wants Kate to discretely learn her entire part in the original Norwegian.  He also seems to have something of a fixation with potatoes.  While this is going on, Kate has a series of sexual encounters where she allows several men to have their way with her.  The film takes an unconventional turn at this point when Kate bifurcates into current self at age 23 and also as a young girl of 13.  Haunting voice overs of teenaged Kate reading the letters which she would leave for herself to read at each birthday, show a gifted and intelligent young girl.  Somewhere along the way, Kate has lost her confidence in her own voice.  The film wanders into more esoteric territory at this point, never to quite return.

“We Go Way Back” has a dream like charm to it.  It doesn’t always succeed in its every attempt  but it is still a funny and often moving film.  It’s clear from the form of the film, that the filmmaker, who had a background in experimental documentary making as well as years as a film editor, still wants to play with nonlinear storytelling.  What isn’t missing is emotional honesty and a lovingly photographed film; the cinematographer is Benjamin Kasulke.  It’s a true independent film with two highly appealing leading ladies.  Also in the strong cast is Maggie Brown as 13 year old Kate and Basil Harris who would re-appear in Ms. Shelton’s next film, “My Effortless Brilliance”.

I was at the New York City premiere of the film on Friday night at reBar.  After introducing the film, the appreciate audience took in the film, and then were given a bonus opportunity to hear a firsthand account of making the movie and the subsequent long road up to this evening.  Before taking a handful of questions from the audience, Ms Shelton first had a conversation with Movieline’s Michelle Orange. The evening topped off at a restaurant directly across the street from reRun, called Superfine, owned and operated by Ms. Shelton’s sister.  Coincidence or conspiracy, you decide.  The gratis beer was quite good.  filmwax endorses both “We Go Way Back” and Coney Island Beer.