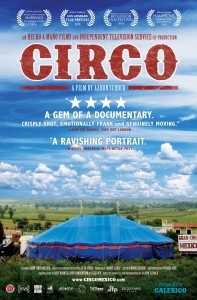 The Ponce family business is in trouble. For over a century they have been clowning, contorting, and taming big cats for audiences throughout the back roads of Mexico. And now not only is the future of their circus, the Gran Circo Mexico, in the balance, but, indeed, the family unit itself. The ringmaster, Tino, and his wife, Ivonne, are bringing up five circus performers, one of whom is a niece. For Tino, traveling ceaselessly with the circus represents a dual responsibility. On the one hand, it continues a tradition passed on from his parents and grandparents; on the other, it’s about the next generation.

We see the young children, ranging from 5 to 12, working day and night, forfeiting a “normal” life for that which Tino has designated for them. The entire family appears to be barely literate. For that reason and others this tour’s more like the end of the line for Ivonne. Her face reveals someone weary of life on the road and a determination not to let her kids suffer the same fate. It was by some token of filmmaking fortune that first-time director Aaron Schock came upon his subjects at this particular time. According to press notes, he had come to Mexico to start a project about corn farmers. The Ponce’s circus just happened to cross paths with the director and after watching their act, he changed course.

With “Circo”, Schock gives us a fly-on-the-wall glimpse in this vérité-style documentary, wisely just allowing his camera to roll. We follow from town to town the family—which also includes Tino’s elderly parents—strike and pitch the entire circus on nearly a daily basis while performing their acts to dwindling audiences. Many moments include the children going through their necessary machinations of learning the ropes. They carry quite a load of responsibility, and while Tino’s love is obvious, we also see that his resolve to keep the show going ultimately wins, though his children are behind in their education and have a very limited social life.

It’s a movie both heart wrenching and, at the same time, quite gorgeous looking (Schock also shot the film in addition to wearing both director and producer hats). By the end of the film’s economical 75 minutes, it’s all too clear what the future of the Gran Circo Mexico has at stake. Also worth mentioning is an outstanding original score provided by the popular band Calexico, adding another lovely dimension to this bittersweet film.