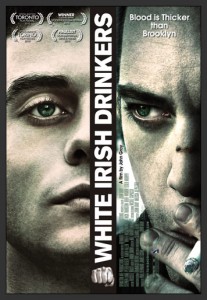 Writer/director John Gray’s feature debut ultimately rises above its weaknesses because of the presence of newcomer Nick Thurston. The rest of the cast is made up of first-rate character actors, but, no matter, there’s no getting away from the fact that “White Irish Drinkers” would have been a stand-out had it not been laden with clichés. That problem falls on the back of Mr. Gray, whose background is in television. “White Irish Drinkers” doesn’t really rise above that smaller scale medium.

The story is set in 1970’s Brooklyn, and Brian Leary (Thurston), a sensitive artistic type and recent high school graduate, is trying to figure out what he’s going to do next with his life. He spends most of his time painting in the basement, out of harm’s way from his often drunk and angry father. When Brian’s not hiding out, he may often be found at the nearby movie palace, the Lafayette, where he works for the kindly Whitey (a dependably great Peter Riegert). The theater is in financial turmoil, so much so that Whitey borrows money from a loan shark named Jimmy Cheeks, a menacing Ken Jennings. Brian, clever lad that he is, convinces Whitey that he should put on live rock concerts as well. Before you know it, Whitey has tapped an old connection and landed the Rolling Stones, which would save the theater.

The rest of “White Irish Drinkers” follows another movie cliché: the troubled boy who makes it out of the neighborhood. Through the urging of one of his friends who is a college freshman, and a budding romance with a high school crush, Brian applies to Carnegie Mellon in Pittsburgh on an art scholarship. Just in time, too, since a number of more violent and unlawful alternatives from all directions seem to be bearing down on him at once. (The film’s title comes from Brian’s pals, who refuse to smoke pot to get high. They adhere to a religious loyalty to the drink.)

As Brian’s parents, Stephan Lang and Karen Allen have little to do but try and hit the notes without going overboard. Less successful in that regard is Geoff Wigdor as Brian’s older bullying brother Danny, a street thug in the making. With the exception of Brian, all the Leary characters lack depth; their scenes could be out of any number of ethnic family dramas where the father is reduced to a bitter alcoholic always picking on one of his sons, and where the mother is little more than a passive enabler.

Despite its faults, “White Irish Drinkers” will still likely help make the young Nick Thurston into a star. His role is the most nuanced and his performance right on the mark. It’s almost worth seeing the movie, if only to catch a young actor on the cusp of a career.  Cheers!