Douglas Sirk and Fritz Lang share the common experience of having left Germany just in the nick of time though Lang’s story is shadowed by some questions. They both came to Hollywood after making films in their native country. And both rose to the top of their game. Lang died in 1976 while Sirk lived until 1987.

In the last 24 hours I’ve watched one film from each of the two directors. Second (first) was Lang’s Human Desire. An apt title since it’s really about little more than basic human need for sensual connection. Gloria Grahame, just a tad offbeat for a leading lady runs this show. This kind of part might have gone to Barbara Stanwyck but Gloria Grahame was terrific.  She might not have been as commanding as Stanwyck, but Grahame was definitely one of the great noir actresses of her day. I also loved her in It’s A Wonderful Life and In a Lonely Place but last night I finally got around to Human Desire (1954) with her and Glenn Ford.  She was steaming.  What a great actress. Every bit as good as Bette Davis, as far as I’m concerned. She gave such a complex performance as Vickie, married to the volatile Carl Buckley (Broderick Crawford). She sleeps with a muckety muck from the transit company that Carl works for and is fired from. He figures out that she must have done something unsavory to get his job back and ends up killing the dude on a train.  It’s the same train that Glenn Ford is riding on.

Anyway, Grahame now joins the circle of great screen actresses from that period between the silent screen era and before I was born. Also included in that small group is Myrna Loy, Carole Lombard and Judy Holiday. 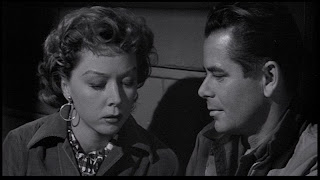 The other classicI finally got to watch was Douglas Sirk’s All That Heaven Allows. Having already watched Magnificent Obsession, Imitation of Life and Written on the Wind (oh, yeah, and Shockproof, written by Samuel Fuller) this leaves perhaps only There’s Always Tomorrow left to be seen. Starring Rock Hudson, Jane Wyman, Agnes Moorehead and Conrad Negal, this is another typically melodramatic work but this great director. Thank goodness that Todd Haynes made Far From Heaven back in 2002. It was an unabashed homage to Sirk. More to the point, it’s the kind of film Sirk might have made. Well, if Sirk was still making movies now, they wouldn’t be ersatz melodramas. But it’s beside the point.  The thing is that Sirk is finally considered among the pantheon of great film makers. It’s impossible to ignore his politics though. One must give him his due for leaving Germany as it was being taken over by the scum of the Earth. As he has expressed in interviews, he was taken back by how many “decent” people he knew had become Nazis.  He was so disillusioned, that he left Germany during the height of the Expressionist period for America.  Oh, did I mention that he had a Jewish wife? 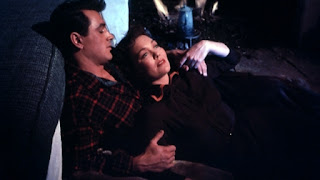 Anyway, Wyman is a widow who falls for a man beneath her class, landscaper Ron Kirby (Rock Hudson). She has two grown children who end up disapproving of the marriage as well as outside pressure from the community. She walks away and regrets her decision. Her ungrateful daughter ends up getting engaged and her son takes a job overseas, circumstances that lead her to realize that she is alone and doesn’t even have her children for companionship. This drives her back to the bucolic home of the man she rejected. He is arriving home at just the moment she drives over. Only he’s on the precipice looking down. He slips on the snowy edge and falls thirty or so feet to the ground below. In a coma, she sits by his side, now completely dedicated to him. He opens his eyes and forgives her. Fade to black.