film review: CLIENT 9 — THE RISE AND FALL OF ELIOT SPITZER 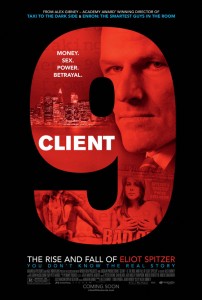 The main lesson to be learned from Alex Gibney’s slick new documentary, Client 9: The Rise and Fall of Eliot Spitzer, is that all too often, temptation plus opportunity equals downfall.

Whether your poison is sex, money, power, or screen-time, it’s beside the point. Spitzer fell victim to the same compulsions his enemies did Spitzer, the former governor of New York, gives Gibney extensive access. He doesn’t seem to edit himself much, and when he does it is done in a thoughtful manner, seemingly wanting to, protect what’s intact of his family and reputation.

To his credit, Gibney, director of the Oscar-winning Taxi To The Dark Side and Enron: The Smartest Guys in the Room, never crosses the line into tabloid-style prurience. The bluntest questions asked — “Weren’t you afraid of getting caught?”, “When did you know you were sunk?” — were crucial to figuring out just what the former governor was thinking at the time.

Unlike so many of Spitzer’s disgraced counterparts — none of whom participated in the movie — he is forthcoming and reasonable when describing what led him to seek out the comfort of strangers. 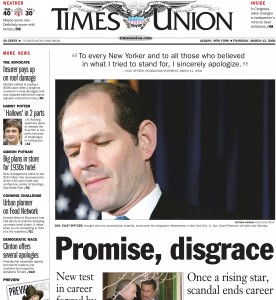 The film is a terrific window into the heart — or better yet, the soul — of darkness, and Gibney handles the whole thing soberly but never boringly. The documentary flashes back and forth in time, going between the upward course of Spitzer’s career and the eventual fallout, as suggested by the title.

His course was singular in both its velocity as well as in its perceived invulnerability. Eliot Spitzer was brought up to be a winner. His father, Bernard, who was a real estate mogul, pushed the young Eliot hard and thrust ambition upon him. After graduating from Princeton and Harvard Law, he went on to work at the Manhattan District Attorney’s office under Robert Morgenthau.

Spitzer picked up his brash personality from his father and from his own unique passion for choosing fights where he usually took high moral ground. And it put off a lot of people.

While those people respected his tenacity, many did not welcome his style. He started collecting enemies early on. No one denied his uncanny ability to swiftly and effectively bring his subjects to justice and change bad policy.

In 1994, at the age of 35, he became New York State Attorney General. Untraditionally, Spitzer made white-collar crime his focus, eventually going after the increasing abuses in the banking and financial industries (his nickname was the Sheriff of Wall Street). Fearlessly, he brought down a number of very prominent titans.

He then went on to be elected governor in a 2007 landslide. Payback seemed inevitable. Gibney employs Peter Elkind, editor-in-chief of Fortune magazine, as well as author of the book Rough Justice, as his primary source. Elkind also serves as one of the film’s producers.

Friends and enemies alike are among those interviewed for the documentary. In the latter category are Hank Greenberg, former AIG CEO, financier Ken Langone, the bizarre Roger Stone, and, best of all, Joe Bruno, former NY State Majority Leader. The list goes on (as does the term “former”). 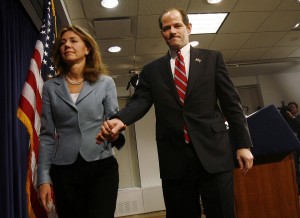 Though discussed at length, missing from the group  are Richard Grasso, former director of the New York Stock Exchange and U.S. District Attorney Michael Garcia, the man who spearheaded the investigation into Emperor’s Club’s client list.

The film does not neglect to emphasize just how unconventional it is for the U.S. Attorney General’s office to go after such a case, let alone their clients.

The only potential misstep Gibney makes is by hiring an actress, Wrenn Schmidt, to portray Angelina, the governor’s favorite girl whom he had visited a number of times. The actual woman agreed to submit to interviews but refused to appear in front of the camera. Schmidt turns out to deliver an entirely convincing performance in what is an unusual start to a very promising career.

Angelina’s participation puts an end to the falsehood that Ashley Dupre was Spitzer’s preferred callgirl. Dupre comes off as an opportunist, evidenced by her subsequent stab at a music and television career after her exposure to the spotlight.

In watching Client 9, what results is a deeper understanding of self-sabotage as well as the specific conspiracy that took Spitzer down. There’s no denying that his being found out, though never charged, was the work of his enemies. Those enemies knew that the public was still largely puritanical when it came to sex scandals, and that right-wingers wanted quid pro quo for Mark Sanford, Paul Stanley, Larry Craig and Mark Foley, just to name a few.

They were not entirely wrong; if you’re going to go after one hypocrite, you need to go after them all.

Eliot Spitzer was a hypocrite, there’s no getting away from that. Audience members will have to decide whether this documentary is his mea culpa or, more cynically, public relations.