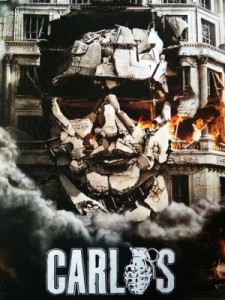 As compelling and often engrossing as Olivier Assayas’ new epic film about the terrorist Carlos the Jackal may be, there’s no reason to sit through the half-day version I saw. Originally intended as a three-part French TV series, and now hitting most American screens in a pared down two-and-a-half-hour edition, there’s simply no benefit to the five-and-a-half-hour Carlos. Mind you, there’s nothing wrong with a really long movie, except when it could have worked as a much shorter film. It might, in fact, have more dramatic heft in its shorter incarnation. The longer version only emphasizes that there’s no dramatic arc, no real character growth, and no big climax.

As played by Édgar Ramírez (The Bourne Ultimatum, Che), Carlos is a narcissist convinced of his genius and readiness for martyrdom, when, in fact, he’s just a savvy survivor, ready to sell out when need be, and a skillful self-promoter. Born Ilich Ramírez Sánchez in Venezuela, and later educated in the Soviet Union, Sánchez speaks many languages and beds many women. The actor, Ramírez, also a native of Venezuela, embodies Carlos in a very believable and subtle performance, commanding the screen without resorting to pyrotechnics. And because the story starts in the ’70s and proceeds with the next 20 years of Carlos’s life, we witness the various permeations of his sideburns and waistlines.

Dan Franck’s script follows a series of turgid terrorist operations, most of which go awry. The film’s centerpiece is the raid and kidnapping incident at the 1977 OPEC conference. Carlos and his small band of German and Lebanese commandos infiltrate the meeting and kidnap a group of the delegates. The operation is a botch, and Carlos accepts a payoff. This is the film’s turning point, the moment where we realize that he’s no Che Guevara, but an opportunist. Rather than risk peril, he ignores directives to execute two OPEC officials and accepts a ransom to walk away. In the end, while a world-renown celebrity, Carlos is beset by medical problems, on the run, and homeless—no country offers him to refuge. Carlos is currently serving what is essentially a life sentence in a French prison. He made a number of attempts, through his lawyer, to persuade Assayas to modify various aspects of his portrayal, none too effectively.

What’s remarkable about the film is the level of details including scores of cast members, locations, sideburn lengths, and bedmates. And, while I might have been somewhat harsh in my complaints of the film’s running time, there are very few slow moments in this evocative film. Olivier Assayas, for his part, remains the elusive and unpredictable filmmaker of the varied Demonlover, Les Destinées, Boarding Gate, and the magnificent Summer Hours. No doubt, he will go on to be included among the truly respected filmmakers of his generation if only for his sheer cinematic ambition and vision. My only advice is to check out the version that allows you dinner and a cocktail afterward.