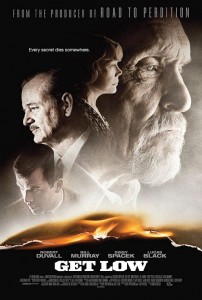 Locals have been telling tales about the crazy Felix Bush for years. A recluse, a violent maniac, a killer; Felix has a worse reputation than Big Foot, only in his case there have been fewer sightings. Until now, anyway. As the end encroaches, Felix, as played by the ever ceaseless Robert Duvall, decides to come out of seclusion and conduct his own funeral. As he claims to funeral director Frank Quinn (Bill Murray), he wants to hear what everyone has to say about him. This is, of course, not an uncommon fantasy. To be a fly on the wall at one’s own funeral is any narcissist’s dream, but one gets the feeling while watching director Aaron Schneider’s new Depression-era film “Get Low” that there is more to Felix’s idée fixe than meets the eye. 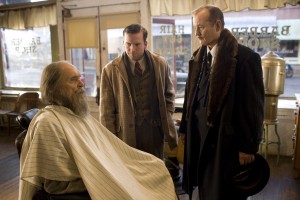 As Felix comes out of his self-imposed hibernation and begins to reconnect with civilization, what is truth and what is fiction begins to crystallize. In order for Felix to plan the funeral, he must find a preacher to speak for him and fill the room. Quinn looks at the spectacle of Felix’s funeral as a financial windfall, and sends his assistant, Buddy (Lucas Black), to stick with the unpredictable Felix. As Felix shaves his Van Winkle beard and updates his wardrobe for a more genteel appearance, the feral look in his eyes begins to dim. As Buddy gets to know Felix, he sees a man who is truly suffering. We learn through their budding friendship that it was shame and remorse that drove Felix into those woods so many years back, and now he wants to try and make things right.

With the possible exception of Clint Eastwood, there is simply no other actor of his generation who could have pulled off this role like Duvall.  Duvall has that unique way of showing the humanity underneath any of his characters, be it hero or villain.  He’s generally revered as one of America’s top actors, and, other than a few blemishes, his track record is amazing. There are plenty of great screen actors, like the retired Gene Hackman or Sir Michael Caine, but neither has produced a consistent and reliable series of quality films like Duvall has. Since the ’70’s when Duvall had a grand slam with the “Godfather” films and “Apocalypse Now”, he has made these undeniable classics: “The Great Santini”, “Tender Mercies”, and “The Apostle”. While I wouldn’t add “Get Low” to that list, it’s a film with other noteworthy performances, including Sissy Spacek as the woman who holds the key to Felix’s past. Their scenes together are just a few that hold the film together and make it worth seeing. Also noteworthy are Gerald McRaney (TV’s “Deadwood”), who has become a dependable character actor these past years, and the always terrific Bill Cobbs (“Night at the Museum”, “Sunshine State”). Bill Murray gives a seamless performance providing some comic relief, no surprise there, and further proves he has the dramatic gravitas to stand up to Duvall.

Ultimately, it’s the cast that makes “Get Low” stand out as much as it does.  A movie, even one as beautifully filmed—David Boyd is the cinematographer, Korey Washington the art director—as “Get Low” needs a very strong story line if it’s to become a classic. And while the script is very believable, there are some confusing elements to Felix’s arc that compromise the movie a bit. Something happens to Felix between the time he walks out of the Appalachian woods wanting to hear others eulogize him to his making his own redemptive speech. I guess the story is ultimately the process of his building the moral strength to do so, yet something left me wondering about his motives and why he didn’t feel the need for redemption earlier in his life. But at the very least, “Get Low” will be another tender mercy in the wonderful career of Robert Duvall.