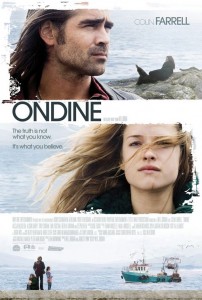 To call Neil Jordan’s new film “Ondine” a modern-day fairy tale would be as apt a description as any. Syracuse (Colin Farrell), a struggling fisherman, lives in a quaint Irish coastal town in West Cork, Ireland. One day Syracuse hoists a beautiful, barely breathing lass out of the sea in his trawler’s net. He revives her only to discover that she has no memory of who she is or where she came from, other than a few faint details. With no other option, Syracuse brings Ondine (Alicja Bachleda) back to his seaside ramshackle of a home. This bachelor pad once belonged to his mother long since gone and became his home again after a brief, failed marriage. Since that time Syracuse, a recovering alcoholic, seems to have shut himself off from most everyone he knew.

The exception being his young daughter, Annie. Wheelchair bound to a great extent, little Annie requires regular dialysis and is clearly the center of Syracuse’s universe. A loving dad, Syracuse carries around guilt about his past behaviors and failings. His devotion to Annie is very clear, as is his sense of chivalry towards the lovely Ondine. The ravenous beauty nevertheless throws a wrench into the works, at least initially so, creating a new social dynamic in Syracuse’s life.

While Ondine is obviously drawn to Syracuse’s generosity and comely looks, he is very cautious at first, keeping his hands and lips to himself. That carefulness merely comes off as gallantry, which only makes him the more appealing. But Syracuse is only a man and inevitably he begins to warm to his otherworldly house guest. He takes her out on his fishing boat. She sings and the fish swarm. How to explain it? Syracuse is too happy for the turn of luck to care. Annie, on the other hand, becomes suspicious of this mystery woman and, taking leave of the dubious home life she shares with her mom, sneaks over to her Dad’s home. Is this beautiful young woman, Annie wonders, a selkie—part seal/part human—an idea she knows from old story books? Selkies are not to be confused with mermaids. Apparently, they are able to shed their seal skin and become human, and vice versa, when they are ready to return to the sea.

Selkies were also the subject of “The Secret of Roan Inish”, directed by John Sayles and beautifully photographed by the great Haskell Wexler. That movie was based on the novel Secret of Ron Mor Skerry by Rosalie K. Fry, and very much a children’s story. Ondine becomes somewhat less child oriented a film as it unwinds. Ondine, we learn, has a history, one she is running from. How the story treads the fine line of myth and reality is all the difference for why the film ultimately works.

Another positive component is the romantic tension between Ondine and Syracuse, which becomes quite palpable. The eventual consummation is almost beside the point when it finally occurs. More to the point, the idea that faith in the possibility of the unknown or the unanswerable can be a source of strength permeates the film. Annie becomes stronger throughout the film, Syracuse opens his heart, the characters invest themselves in life once again. While it might not be groundbreaking as “Mona Lisa” or “The Crying Game”, “Ondine” has much heart and soul. The storyline is at once old-fashioned and completely modern. Speaking of past Jordan works, Stephen Rea pops up as a local priest who vainly tries to keep the non-believer Syracuse on the straight and narrow. Their scenes together lend just the right dimension of humor, which prevents this sweet sea shanty from drowning in sentimentalism.