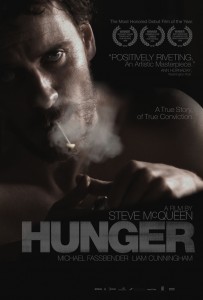 The double meaning in this astonishing film’s title refers to both the hunger for food as well as for freedom. The prisoners in this factually-based and brutally realistic film are starved for both.

In 1981, during the troubles in Northern Ireland, the UK government was imprisoning IRA members but refusing to give them political prisoner status. As a result a group detained at the HM Prison Maze (aka Long Kesh), led by Bobby Sands, went on “blanket protest” which basically meant refusing prison uniforms. This led to them being exposed to almost unimaginably horrendous conditions and as well as to a series of violent repercussions.

The film, the first directed by British multi-media artist Steve McQueen, opens with a middle aged man beginning his day. Much of his initial behavior seems mundane; getting dressed and being served toast &amp; tea by his wife. But then we see him soaking his bloodied and swollen knuckles in the bathroom sink; and, just before he drives off to work, he kneels down to look under his car for a bomb. This man turns out to be prison guard, Raymond Lohan (Stuart Graham). The film’s narrative is confusing at first; we assume that the story will be about this wounded individual. We also assume that he is carrying around fear, guilt and grief since he works in such a brutal environment. Surely he must feel ambivalent about his job.

But what we soon realize is that McQueen’s narrative is not going to appeal to those traditional expectations and that the story doesn’t follow Lohan. In fact, the trail is shortly thereafter picked up by a new inmate, a young man (Brian Milligan) clearly out of his element, terrified but decidedly a soldier for the cause. He is stripped of his clothes, given a ratty blanket and thrown into a prison cell, one which is cold and whose walls are smeared with his cellmates feces. The ensuing scenes are the hardest to watch. We soon find out how these political prisoners survive and how contraband –whether it be communications or objects– are secreted in and out of Maze.

Soon after we are introduced to the film’s main character, Bobby Sands, played by the exceptionally talented actor, Michael Fassbender (HBO’s “Band of Brothers”, “300”). Sands is the moral center of the film and it is to this film’s credit that its most riveting scene –and perhaps one of the finest I’ve seen in any film for quite some long time– is of him and his visiting priest, Father Dominic Moran (Liam Cunningham) sitting across a table. It is during this scene, entirely done in one prolonged shot, that Sands reveals his plan to begin a hunger strike. Cunningham effectively expresses the priest’s morally complex feelings of love, sympathy and, finally, outrage. He practically begs Sands not to pursue the hunger strike, understanding that it means certain death for Sands and God knows how many others. The scene is a tour de force.

The movie has long quiet moments where the camera drifts and focuses on things that are seemingly mundane, reminiscent of Terrence Davies’ “The Long Day Closes” (1992). Those moments, especially when couched around the last portion of the film, create a perfect tension that reflect the fundamentally endlessness of prison days. Also painfully endless are the 66 days that it takes for Bobby Sands to starve to death. If you can watch these scenes and not walk away a different person than when you walked in, you are a stronger soul than I.

It took nine more Irish Republic prisoners to die before the British government intervened and the strike was called off. Sands funeral drew over 100,000 people and a tide of international sympathy. McQueen’s very fine film brings a new level of verisimilitude to the prison film that Alan Parker did with his 1978 Midnight Express or that Franklin J. Schaffner did with Papillon before that. Like those two latter films, Hunger is extremely tough to sit through but it is transformational and for that one should be very grateful.