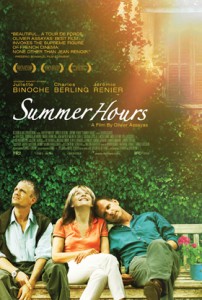 “Summer Hours”, Olivier Assayas’ latest film, opens with children running free through gardens and woods around a typically beautiful French summer home. Filled with antiques and objets d’art, the house belongs to the Berthier family, whose matriarch is the 75 year old but still stunning Hélène (Edith Scob). Hélène owns the art collection that was handed down to her by a deceased uncle, a famous artist himself, with whom she may have had an intimate relationship years earlier. Now, at the end of her life, Edith is beginning to make the practical preparations of passing along the collection and the house to her three grown children, Adrienne (Juliette Binoche with blond tresses), Frédéric (Charles Berling) and Jérémie (Jeremie Renier). Only Frédéric, himself the single father of a tempestuous daughter, is the only one of the siblings who wants to keep the beautiful house and leave it to the next generation. Both Adrienne and Jérémie have jobs and lives that keep them both physically and emotionally distant from France. It is emotional distance that is at the heart of Assayas’ beautiful story.

Unlike his earlier film, “Boarding Gate”, “Summer Hours” explores people coming to terms with aging, mortality and close relationships. In other words, it was made in the great tradition of French filmmaking. But the film feels more Chekhovian than one plucked from the catalog of Eric Roemer and other forbears. The first few sequences feel almost staged like a play only better as they are so cinematically resonant. Like his Gallic colleague, Arnaud Desplechin, Assayas is interested in family and its inherent legacies. As good as “A Christmas Tale” was, this film feels more restrained and frankly more honest. Without providing any big moments, the success of Summer Hours is in its collection of smaller moments.

When appraisers come to the house prior to its sale, Frédéric gives the family’s elderly housekeeper, the one who helped raise him, a vase that belonged to Hélène. He gives it to her without mentioning its value; a counterpart to another piece which ends up in Musee D’Orsay along with a great deal of the home’s collection. But the housekeeper believes she was given something small. She tells her nephew who drives her away from the house for the last time that she would have been embarrassed to take anything important. Her tie to the object is an emotional one, one that has memories from years of putting flowers in it. In this day and age where homes are referred to as investments, Assayas captures how we use monetary means to emotionally distance ourselves from pain. Its understandable -who likes pain after all? But pain is part of life and has the role of reminding us that without pain and loss there is no love to begin with.

As in the beginning, “Summer Hours” ends with young people running around the old family house. Only a few years may have passed since those teenagers were merely babes in the woods. While they are still able to enjoy the freedom that childhood bears they are also just on the cusp of adulthood and all that that implies.