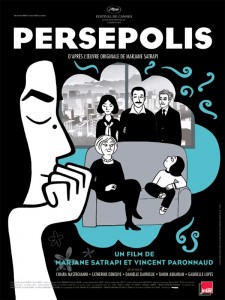 The Film Society of Lincoln Center wisely chose Marjane Satrapi and Vincent Paronnaud’s “Persepolis” to close its 45th Season. The French language animated film, mostly in black & white, opens in theaters in both NYC and LA today. The film feels at once nostalgic and freshly new.  Even for those who don’t primarily identify themselves as political, the story, adapted from a series of autobiographical graphic novels of the same name, is a universal one; that of a young woman’s journey from innocence to maturity. It just so happens that the back drop of her story includes the Islamic Revolution in Iran and the country’s turn from a socially progressive society to one of fundamentalism and fear.

Marjane (the voice of Chirara Mastroianni, Marcello’s daughter), our young heroine, is growing up in Tehran during a most tumultuous time. When we are first introduced to her, she is your average precocious nine year old but it’s not long before she experiences the loss of her beloved uncle who is executed as a war criminal. By the time she is 14, her parents, concerned for her safety, send her off to boarding school in Vienna. The scenes that follow, where young Marjane is so homesick for her parents (the voices of Catherine Deneuve and Simon Akbarian) and her grandmother (France’s legendary actress Danielle Darrieux) are among the film’s most gripping, where for all intents and purposes, you forget you are watching a cartoon.

Not to suggest that the movie is all doom and gloom, quite the opposite. The movie works as well as it does is because none of the characters are two dimensional and the reason they seem so western is because essentially they are. Not that long ago Tehran, like Paris or Milan, was quite the cosmopolitan city with an emphasis on culture and scholarship. Then the scoundrels got in and took over, labeling its intellectuals and politicians enemies of the state and preceded to systematically wipe them out. Women lived in constant harassment forced to cover their heads if not their entire bodies, and were treated like second class citizens. Marjane learns to cope in an impossible situation by rebelling to the extent where she gets into serious trouble. Whether she is listening to her beloved Iron Maiden on her Walkman, going to a secret dance or becoming involved in a romantic entanglement, it is her way of keeping grounded in an environment that is anything but. It also helps that her family is very loving and never once tries to stymie her independent streak. One of the more provocative questions Persepolis poses is how does one cope with living in a country you no longer recognize as your own. By the end of the story, the life that Marjane and her family once knew has been wiped out much like the those who lived in the Persian city of the title experienced back in the 6th Century B.C.

According to Ms. Satrapi, they are dubbing the film in an English language version with a cast that includes Iggy Pop, Sean Penn, and Gena Rowlands to be released soon by Sony Pictures Classics. If this boosts American audience attendance, then I’m all for it.

“Persepolis” has won year end awards from the L.A. Film Critics Association, the New York Film Critics and National Board of Review and is nominated for best foreign language film from the Golden Globes and a Best Foreign Film Independent Spirit Award.