film review: THE OTHER SIDE OF THE MIRROR — BOB DYLAN LIVE AT THE NEWPORT FOLK FESTIVAL, 1963-65 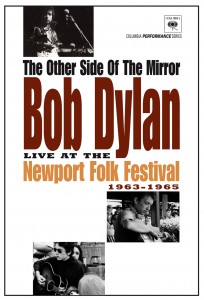 Us hipsters living in such edgy NYC neighborhoods as the Lower East Side or Williamsburg have sunk a lot of dough into our music collections over the years and while we periodically weed through our CDs and LPs, tossing out the odd Terence Trent D’Arby or Linda Rondstat album, you’d be hard pressed to find anyone who has loosened their grips on their copy of Sgt. Pepper’s or Back in Black. And then there’s the ubiquitous Dylan collection which necessarily includes Bringing it All Back Home, Highway 61 Revisited and Blonde on Blonde. [My personal favorite is Nashville Skyline but that’s getting off topic.] It’s no coincidence that any serious Dylan collection includes those particular three works for it was during that seminal period when Bob Dylan folkie, became ‘DYLAN, Spokesman of a Generation’. Nowhere is that transformation more vivid than in the new documentary, Murray Lerner’s “The Other Side of the Mirror: Bob Dylan Live at The Newport Folk Festival, 1963-1965”. All the footage –70% of which has never been seen before– is lovingly pieced together from those three summers and Lerner, wisely, allows the footage to speak for itself. There are no talking heads, no aging rockers’ waxing philosophical, mostly just Bob Dylan playing Bob Dylan songs. Oh, there are some terrific moments with Joan Baez, Johnny Cash, Pete Seeger and Peter, Paul &amp; Mary, but mostly it’s just Bobby Dylan, singing into the microphone while strumming away on his guitar.

Dylan had emerged from the NYC folk scene in the early 60’s and had already caused quite a stir but not many of us aforementioned hipsters were around back in those days, or at least not old enough to remember just what a sensation this punk folk singer caused back in the day. Folk music was such a huge phenomenon at the time, its fans such die hard purists, that any modifications to their songs were often met with outrage and while Dylan was initially met with a certain amount of skepticism and even derision, it was impossible for anyone with a mind of their own to ignore the obvious: this skinny Jewish kid was the shit. As portrayed in the new Todd Haynes biopic, “I’m Not There”, Dylan was all about persona and his particular brand of shape shifting left everyone enthralled. Over the course of “The Other Side of The Mirror”, we get to witness one of these morphings right before our eyes; that of a shy self-conscious folkie into a cocky rock star. It’s worth the price of admission, I can assure you.