film review: THE AXE IN THE ATTIC 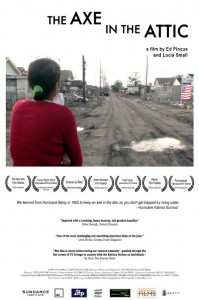 After the New Orleans flood of 1965, many of those who survived would keep an axe in their attic so that, in the event the water should ever again rise to the top of their homes, they would have a way out. Interestingly, some of the survivors of Hurricane Katrina, forever immortalized in TV and still images, standing on their roofs hoping for rescue owe their lives to this practice.  Now documentary makers Lucia Small and Ed Pincus bring us “The Axe in the Attic”, a fine contribution to the 45th New York Film Festival and one that pulls no punches. Where’s the outrage you may ask; this remarkable documentary gives its subjects – both victims as well as its creators – a platform for expressing it. The results are moving.

Don’t allow the blip of controversy about this movie get in the way of checking it out. While Spike Lee’s “When The Levees Broke”, a powerful and necessary work of documentary film making itself, is planted firmly in New Orleans interviewing survivors and celebrities alike, Pincus and Small hit the road for a 60-day tour of America’s back roads to find their subjects.  It’s no exaggeration to suggest that those displaced residents of New Orleans belong to the single largest American diaspora. They can be found in FEMA trailer parks and crashing with family, but their collective feelings of depression and hope are truly profound. The controversy – or criticism – that the film is generating has to do with the two filmmakers inserting themselves so centrally into the story. Many of said critics believe that the focus ought to be solely on the victims and that showing the film maker’s own problems just intrudes on the victims’ dignity and to be honest, at times their presence does have a taint of narcissism, but ultimately I found the decision to be a successful device.

This second, parallel story, that of Lucia Small and Ed Pincus, deals with their own frustrations and outrage. Sometimes it’s with each other but more often it is the United States government, FEMA and a president who comes off as ineffective and uncaring, that raises their hackles. For 110 minutes Small and Pincus represent us. That said, they’ve put themselves into their own documentary almost as subjects, something most documentary makers try to avoid. As a result, they are too vulnerable for their own good and are put to the test.

Hearing one horror story after another by decent hard working people, seeing grown men crumble, marriages falling apart – one after another – their road trip begins to take its toll. Lucia Small, the younger and steelier partner, believes strongly that no matter how difficult it gets, they should remain neutral and not give into their impulses. Pincus, a long time lefty, is less cautious. They find themselves often being asked for money by their subjects who are basically living hand to mouth. In one memorable scene, Ed finally gives in and hands a small amount to one of their subjects. Lucia, already very emotionally frayed by the journey, storms off in a huff. We know she’s stuck in a no win situation and one wonders how crucial it is to adhere to some old code suggesting that documentary makers never get emotionally involved in their stories. “The Axe in the Attic” ends up telling two parallel stories about the frustration of giving and getting assistance. Its subjects come across with honor and dignity, as in the end, so do its storytellers.