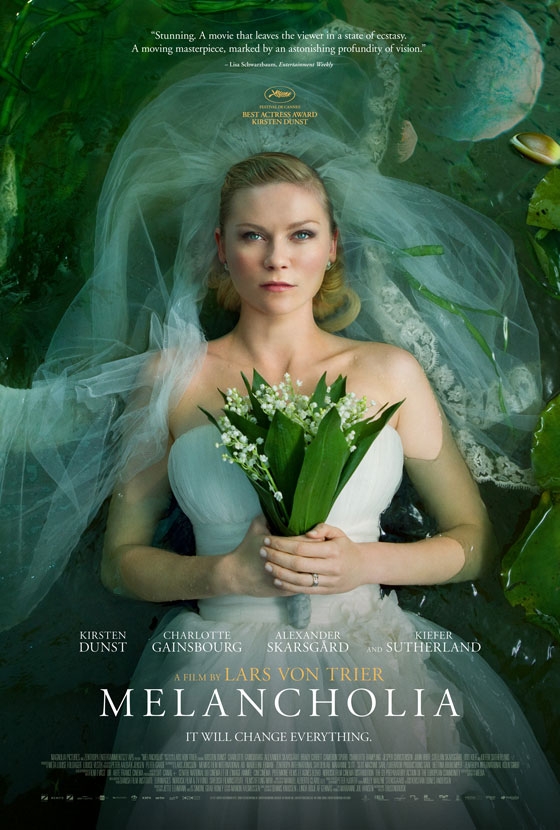 While the planets may not have aligned so well for director Lars Von Trier at this year’s Cannes Film Festival where he was made persona non grata, his new film, “Melancholia” seems to be faring much better. An end of days tale, the film plays out in two distinct sections. After an otherworldly extended prologue (which has garnered an occasional ovation at festival screenings), the movie moves on to its first chapter, the wedding of Justine (Kirsten Dunst) with Michael (Alexander Skarsgård). The wedding is extraordinarily lavish taking place at the sprawling mansion and grounds of Justine’s sister, Claire (Charlotte Gainsbourg) and her wealthy husband John (a very good Kiefer Sutherland). A small bright celestial entity appears and disappears in the night sky.

Over the course of the wedding, a clinically depressed Justine sinks further and further into a state of despair. Her circumstances are not helped by her cold removed mother (Charlotte Rampling), her clownish removed father (John Hurt) or her morally corrupt boss, Jack. Jack (Alexander’s Dad, Stellan), the deviously ambitious owner of an advertising firm where Justine works, pursues her throughout the wedding for a hook line on a new ad campaign. Justine is surrounded by toxicity and feels compelled to sabotage her own wedding.

Before the night is through, and without much histrionics, the marriage has ended. Her Mom and Dad have both abandoned her as she slides into a near paralyzed state of despair. Rarely has depression been portrayed as nightmarishly accurate on screen before. Dunst, an actress swiftly rising up among the ranks of her profession, has admitted to struggling with the disease herself, as has Von Trier.

Chapter 2 starts the following morning and subsequent days where attention now turns to the approaching celestial object, the planet Melancholia. Focus now shifts from Justine to John and Claire. There seems to be a tension between the scientific information that’s available and the barely suppressed panic that the family feels. John has forbidden the terrified Claire from going online as he feels she is needlessly frightening herself with dubious information as well as their young son, Leo (Cameron Spurr). Jack keeps up a positive demeanor, constantly reassuring Claire that the planets will only pass one another bringing on a once in a lifetime spectacle. He constantly stands by his telescope calibrating, recalibrating, with a smile set on his face. But, of course, we know better. We’ve seen one or two Lars Von Trier films before and understand where this film is destined.

“Melancholia” is, in short, a masterful film by a craftsman at the top of his game. The film is economical in every way except for its beauty which leaks from every pour. He gets strong performances from everyone and with rare exception, side steps the cliche trappings of other end-of-days or science fiction films.

The film brought to mind another recent release that had a planet looming in the sky and with no other science fiction special effects, “Another Earth” by Mike Cahill. That film, too, used the notion of another world as metaphor for, well, your guess is as good as mine: second chances, ecological retribution, the arbitrariness of it all? The film was shot by the D.P., Manuel Alberto Claro with Art Direction by Simone Grau Roney. Few other films deserve the visual and design credit that “Melancholia” deserve. It sports a fine cast which also includes Brady Corbett as a sycophantic nephew of Jack’s, and the always good Udo Kier as the bewildered wedding planner. 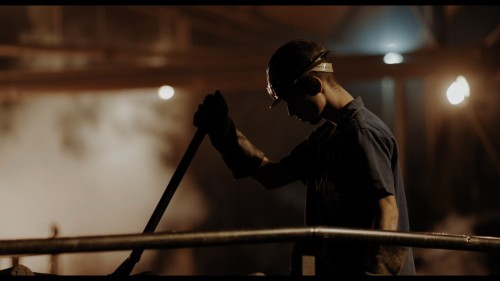 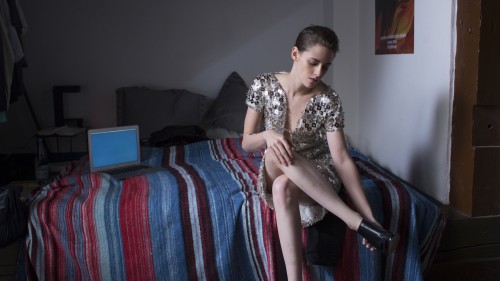