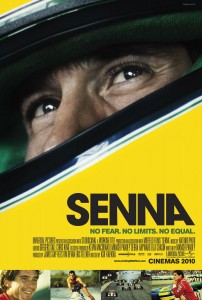 In the popular media Ayrton Senna has often been portrayed as arrogant, a womanizer or driven (pun intended) despite all else.  Asif Kapadia’s new documentary, “Senna”, looks to alter that perception, or if not alter it, at least broaden it. The movie successfully introduces a far more rounded-out and sympathetic personality for the mainstream, many of whom may not be terribly familiar with either Senna or the sport of high-speed auto racing.  That’s certainly the case here in the United States where Formula One is probably sandwiched somewhere between rugby and Jai-alai in terms of its popularity.

There’s no doubt that Senna was a man of great ambition but his humanity seeps through most every frame in which he has been captured.  And there are ostensibly thousands of hours of which 106 minutes have been impressively edited by Chris King and Gregers Sall, and presented in Kapadia’s emotionally satisfying documentary.

While the film shows his personal scuffles, most notably with his McLaren teammate Alain Prost and the late Formula One FISA president Jean-Marie Balestre, we are also privy to Senna’s ceaseless fight to introduce more safety measures to the sport and his rather Zen approach to the grid.  The film, to some degree, dispels the criticism that he was too aggressive, though there were numerous occasions he collided with other racers. Kapadia’s neglect to criticize Senna with any significance might be one of the film’s minor pitfalls.  Yet one can’t deny that the man brought a combination of athleticism and spirituality to the sport that previously didn’t exist and is largely responsible for modernizing it.  And while he was not always particularly popular in the clubhouse he was beloved to millions of fans and remains a national hero in Brazil to this day.

Wisely, the documentary highlights a few particular races which follows Senna’s lightning quick ascendancy to the top including his win at the Monaco Grand Prix in 1984, and most famously of all his win at The Brazilian Grand Prix in 1991 where his car locked in sixth gear.  The race was so taxing on him that his fingers had to be literally pried off the steering wheel.  Considering that drivers going hundreds of miles an hour must slow down at curves, demonstrates how Senna got through the race through sheer determination.  The moment where he raises his trophy despite being in excruciating pain and then tearfully hugging his father is every documentary filmmaker’s money shot.  The sequence would have been unbelievable had it not been caught on camera; in this case the one inside Senna’s car.

For those unfamiliar with the outcome of Senna’s trajectory, it can only be said that his legacy has had a terrific impact on Formula One.  As a result of his career, safety measures were implemented which have resulted in no deaths on the circuit.  “Senna”, the movie, is a bittersweet love letter and overdue portrait about one of the great sportsman of our time.