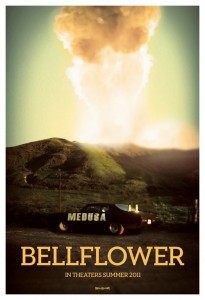 Yikes!  I can’t say I wasn’t warned.  “Bellflower” gets under your skin and, like some sort of viral infection, it stays.  It’s a lot like “Another Earth” in that way, only “Another Earth” creates a second planet Earth while “Bellflower” sets to destruct the one we’re stuck with.  I’ve heard it compared to Gaspar Noé’s “Enter The Void” in that way; and it’s true, Noé’s films are disturbing and gut wrenching, and stay with you long after closing credits.  You feel, initially, somewhat assaulted by the disturbing images and violence but there is also something emotionally authentic about the experience so you can’t just dismiss it either.

“Bellflower”, the first feature by Evan Glodell in which he also plays the lead role of Woodrow, who along with his best friend Aiden (Tyler Dawson) are two Wisconsin transplants living in Los Angeles.  In anticipation of some remote prediction of an apocalypse, Woodrow and Aiden build a flamethrower which they expect to use for protection against who knows what.  One evening, early in the film, they go to a local bar where Woodrow meets the fetching Milly (Jessy Wiseman) and love is in the air.  They ride off spontaneously to Texas for a prolonged first date and come back as a couple, despite Milly’s warnings of being romantically destructive. 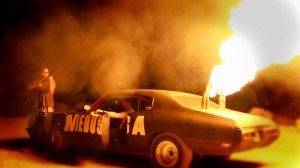 The look of “Bellflower” which is largely a product of Glodell’s camera, the Coatwolf Modell II, the homemade product of much mechanical noodling, which let’s you know right away that the film is not likely to have a happy ending.  There are many such clues most of which are found in the visual and aural design of the movie.  Joel Hodge shot the film while the crew boasts a crowded sound department.  “Mad Max” and its sequel “Road Warrior” have been widely mentioned as an influence on the film, and it shows most obviously in its references to ‘Lord Humongous’.  It should also be noted that one of the other stars of the film is ‘Medusa’, an indestructible tank of car which shoots flames out its ass.  Aiden builds it for Woodrow as part of their nihilistic fantasy.  It’s nothing to smirk at since by the movie’s end, you’re caught up in the fantasy as well.

“Bellflower” opens Friday, August 5th at The Angelika in NYC.