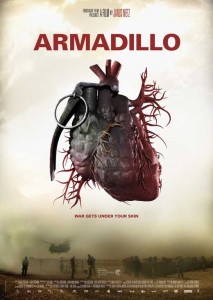 Directed by Janus Metz, based on an idea by Kasper Torsting
Produced by Ronnie Fridthjof &amp; Sara Stockmann
Released by Lorber Films
Danish with English subtitles
Denmark. 100 min. Not Rated

Once upon a time we could easily separate ourselves from soldiers of war. What they were doing, the acts they committed in the name of peace or peacekeeping, happened, you know, over there. We were here in the civilized part of the world, safe and sound, reading stories in the paper or watching the news on TV. Two things changed all that: 9/11 and the cottage film industry it spawned. Documentaries like Janus Metz’s “Armadillo” and last year’s “Restrepo” have put the camera right into the center of the action, and by extension, us as well. We have become complicit, to some degree, by becoming witnesses while soldiers perform their functions. If a heinous act is committed, we are there to see it. With “Armadillo”, the military has given Metz, a Danish filmmaker making his feature-length debut, unprecedented access within the embedding process (though with parameters).

“Armadillo”, which won a Grand Prix in Cannes last year, is a box-office success in Denmark. Will it have the same success here in the States? Well, regardless of whether it should (and that is certainly the case), there seems to be the perception that Americans have developed a fatigue with films concerning the post-9/11 wars. In addition to “Armadillo” and “Restrepo”, there has also been myriad of other documentaries on the Afghanistan and Iraq wars. There has been no shortage of narrative films as well, including Nick Broomfield’s “Battle for Haditha”, HBO’s “Generation Kill”, and, of course, last year’s Oscar-winning “The Hurt Locker”. This weariness is probably more of a reflection of Americans’ exhaustion with war itself. Why go to a movie when the real-life war seeps into our lives enough as it is? Well, “Armadillo” makes a strong case for making an effort. It’s so jarringly straightforward and unencumbered with hazy agendas. It cuts through the morass. It makes no attempt to say anything about the U.N. effort or the American foreign policy. It simply shows a band of young Danish soldiers during their six-month tour of duty. There is the typical ennui soldiers must endure, which is countered by working out or watching on-line porn. Then there are those surprise ambushes by the local Taliban, one skirmish late in the film is especially dramatic and, because it was all captured by Metz, resulted in the military’s about face regarding access. 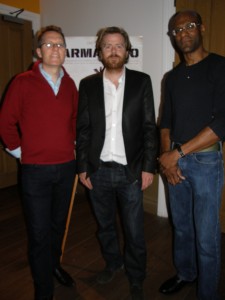 One aspect of the film that might have been explored further is the relationship between the soldiers and the local Afghanis. One early scene shows the soldiers on patrol—Metz primarily focuses on four or five of the young men—and their efforts to obtain information from some local villagers. The villagers explain that they cannot help the Danes even if they wanted to since the Taliban would kill them for collaborating. The staff sergeant explains that if they can rid the area of the Taliban, they can build schools for the local children. Of course, all of the women and children would have fled the village before that, an obvious fact that makes one question his gesture in the first place. It’s also quite possible that these particular villagers might be Taliban for all we know.

Nor do we get into the minds of these men. The camera sometimes lingers on their young faces, but it’s awfully hard to read what is going on with them. Whether by design or circumstance, the film observes them more on a physical or visceral level. And that ultimately serves the film well. War, after all, wants bodies not minds on the frontline. It should be mentioned that there are moments of carnage in the film, and while they do not feel gratuitous in any way audiences should be warned, “Armadillo” is not for the squeamish.

As we approach the 10th anniversary of 9/11 and the wars that came in its wake, “Armadillo” feels both new and old at once. The grassy field where the final controversial episode takes place could be thousands of other fields where young men have died over the course of centuries. It’s a theme that may or may not have been intended but one which has rarely been depicted with such immediacy.