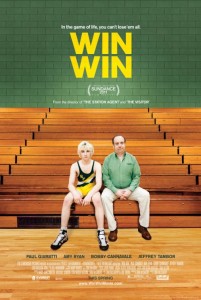 Thomas McCarthy, a director of two prior inspired films, “The Station Agent” and “The Visitor”, has gone and added a rather predictable dramedy to his portfolio. “Win Win” starts off with a quirky acoustic guitar soundtrack accompanying Mike Flaherty (Paul Giamatti) as he jogs down a sylvan path. A moment later, he’s brushed by two passing runners, who might have stepped out of a fitness catalog. Mike stops to catch his breath, then gives up, and walks back home. This opening sequence is full of so much promise; there’s a familiar lived-in quality to it. But sadly, regardless of how likable Giamatti’s salt of the earth schlemiel might be, the character never quite adds up to much more than a composite of what we’ve already seen in far better movies like “Sideways” and “American Splendor”, to name just two.

Mike, it turns out, is a real family man, with two daughters and a pretty wife, Jackie (Amy Ryan). As an attorney, he scrapes by taking on elderly clients. He’s also the head coach for the local high school’s losing wrestling team. But drowning in debt, Jack makes an ethically dubious decision, rather than confide in his strong-minded wife. This is a problem with the story and effectively reduces Ryan’s role in the process. Nevertheless, she delivers a deft performance though she has less to do here than in “Jack Goes Boating” and “The Office”. The good news is that Giamatti and Ryan make a credible pair.

Burt Young plays Leo, an elderly client going senile who ends up as Mike’s legal ward. This is where Mike’s ethics become sticky. When he can’t locate Leo’s troubled daughter, Mike accepts a monthly stipend and puts Leo in a nearby nursing home, facts he keeps from Jackie. Shortly after this occurs, Leo’s grandson, Kyle (Alex Shaffer), shows at his granddad’s doorstep. Mike and Jackie open their home to the bleached-blond, rebellious boy, who has nowhere else to stay. And in a happy coincidence, it turns out that Kyle is an especially talented wrestler. You can probably see where most of this is headed. Even when the bad mom shows up, the script never really goes that deep or that far. And by the time she does, about half way into the story, Kyle has softened to the Flaherty clan, indeed, becoming one of the family.

Win Win has the good fortune of a great supporting cast, however. In addition to Young, there are A-list character actors like Jeffrey Tambor and Bobby Cannavale, both of whom act as assistant coaches and friends to Mike. The overall movie is sitcomy, while the scenes with Tambor and Cannavale have chemistry and energy. These three terrific actors give the film its most comical moments and provide the payoff in this otherwise likeable but lackluster film.