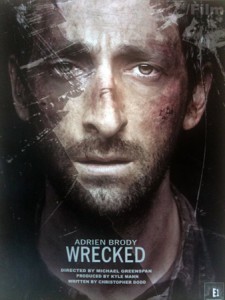 What is it about “Wrecked” that pulls you in? It doesn’t necessarily distinguish itself in any particular way. In fact, it might remind of you of several other films, two that are currently in theaters.

One is “Unknown”. That movie, starring Liam Neeson, also includes a leading character in a car crash and who loses his memory. The second is Danny Boyle’s “127 Hours” starring the Academy Award announcer James Franco. In that latter film, the hero Aron Ralston, spends the majority of the film pinned between a rock and a hard place.

In “Wrecked”, Adrian Brody portrays a character credited as “The Man” who suffers a similar fate to Ralston for a good portion of time. In the case of “Wrecked”, our hero has the additional burden of amnesia. Once dislodged from the auto wreck in which he has been trapped for the first 20 minutes or so of the film, he spends the balance trying to figure out how he got to the bottom of the ravine and how the heck to crawl out.

It’s a fun predicament to watch, much like those scenes in “Cast Away” just after Tom Hanks has become shipwrecked. Like the above referenced movies, this is a story of a man’s journey out of Hell. Isolation is not just punishment, but a kind of catharsis for these men. Though in the case of “Wrecked”, The Man can’t even remember how he screwed things up so bad. Through the course of the film, as he attempts to crawl his way back to civilization, the pieces slowly begin to fit together again.

Those clues don’t exactly add up to much good news. When he finally gets the car radio working news of bank robbers on the lam paint a very ugly picture. The dead body in the backseat with the gun doesn’t bode much better. And then there’s the spectral figure, clearly a figment of The Man’s imagination, which keeps returning to the scene of the accident to try and give him help.

Lastly, there is a very real companion in the form of a lost dog which ends up helping him keep some semblance of sanity and determination to survive. You might say that he plays a similar role that the volleyball, Wilson, played for Hanks’ Chuck Noland.

What “Wrecked” does have going for it is a solid performance by its star, Adrian Brody, an actor who may certainly claim official leading man status. After performances in “The Pianist”, “The Darjeeling Limited” and “Cadillac Records”, there’s no doubt that Brody can carry a movie.

In “Wrecked” he is in every frame of the movie and deftly delivers a performance expected of a star. There’s not much by way of subtext in this movie, directed by Michael Greenspan, but it’s an entertaining suspense piece, similar perhaps to something Bogart might have starred in seventy years ago.