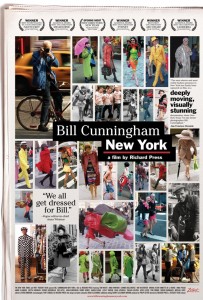 Bicycling around Manhattan on his 29th Schwinn—the first 28 were stolen—photographer Bill Cunningham is constantly on the look out for the latest fashion trends. He shrewdly realized some time in the early ’80s that the answer is often at street level and not necessarily on the runways. While he still makes it to Fashion Week in Paris, he’s most excited when shooting on the sidewalks of midtown. Many of those photos have been filling the pages of The New York Times these past few decades. Before that, Cunningham shot for Details magazine and Women’s Wear Daily. Each chapter in his career is so lovingly related here that they are worthy of their own documentaries.

An enigmatic but thoroughly New York figure, Cunningham should not be confused with a society page photographer, although he does shoot high society doyennes. The point is that he is more interested in how women look in clothing, and he draws absolutely no distinction between classes. Cunningham himself is decidedly unfashionable in his non-descript blue smocks. The abundance of pockets allows him to carry his many spools of film. Yet he lives and breathes for fashion, something he strongly believes is a result of imagination and the courage of individuality. As Cunningham points out, since the fashion district has disappeared along with all the jobbers and other characters, we’ve become a society that dresses the same in our mass manufactured made-in-China wardrobes. Standing on the corner of Fifth Avenue and 57th Street, Cunningham performs what may best be described as a dance, shooting one passer by’s shoes and another’s jacket.

Interviews here include such luminaries as Anna Wintour, herself the subject of a recent successful documentary (“The September Issue”), Annette de la Renta, author Tom Wolfe and others. Cunningham knows everyone in the fashion circuit, and is a beloved figure at The Times. He has a smile and hug for practically everyone and refers to many as “child,” not unusual for someone who has been around as long as he has. What director Richard Press makes pitch perfectly clear is that the 82-year-old Cunningham has dedicated his entire life to his work, leaving time for little else, including meals, hobbies, or relationships for that matter.

A secondary story unfolds during the making of the film, the displacement of Cunningham and many of his neighbors at the Carnegie Hall Apartments, most of whom are elderly artists who have lived in the celebrated studios for decades. This subplot is, in fact, the subject of Josef Birdman Astor’s film “Lost Bohemia”, a doleful and infuriating account of the death of yet another New York institution. Cunningham, who has lived in his studio for decades amidst filing cabinets stuffed with prints and negatives, reacts to his mandatory apartment inspection matter-of-factly with a smile and a shrug, as he does to most everything.

Late into this fairly straight-ahead documentary, the director, sitting off-camera, finally seems able to get Cunningham to stop working for five minutes. He sits him down, and, probably knowing that the filming is winding down, finally gathers the courage to pose two questions to his subject. Cunningham’s response is worth the price of admission—he reveals more by the manner of his reply than in the specific words. The moment is riveting movie-making and one which will make many viewers choke up. “Bill Cunningham New York” is, in the end, a deceptively deep work. It sneaks up on you, and through its quiet persistence, works its way into your fiber. Just don’t be surprised if you leave the theater wanting to cut up your Banana Republic credit card.