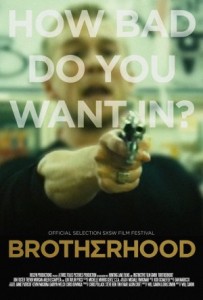 “Brotherhood” is an exhilarating and thoroughly enjoyable roller coaster ride.

Concerned with a fraternity hazing stunt gone horribly awry, the movie doesn’t necessarily bring anything much new to the action suspense genre – it’s truthfully quite conventional — but through its fine editing (John Schaeffer) and strong direction (Will Cannon) the pacing (fast &amp; furious) does not let you down. There are any number of completely implausible events that occur over the course of its economically 76 minute running time but you can not fault it for lacking entertainment value.

The cast of “Brotherhood”, like so many indie low budget movies in its ilk, is cast with mostly twenty-something vaguely recognizable faces. Mostly TV or former child actors, the cast includes Trevor Morgan (“Jurassic Park III”, “The Glass House”), Jon Foster (“Life as We Know It”, “Windfall”) and Lou Taylor Pucci (“Thumbsucker”, “The Chumscrubber”). As competent, though mostly one-note, as the actors’ performances are in “Brotherhood”, performances are really beside the point. The movie is not character driven and the actors are mostly there to serve the plot.

Without giving away specific plot points, it’s a case where the problems pile up over the course of the movie; just when you think the guys have gotten out of one fix, two more problems are thrown their way.

There are a couple of incidents that in any other movie would be unforgivable: one concerns a local cop who stumbles into the misadventure but agrees albeit reluctantly to not report what he has seen. The idea that he would imperil both his career and his personal life seem highly unlikely. The other issue has to do with a witness, an overweight girl, who conveniently keeps mum. She too ends up just providing the script with an excuse to get rid of one of the fraternity brothers for most of the ensuing evening. But in a movie as garishly cartoonish as this one —call it a poor man’s “The Hangover”— it’s silly to perform forensics on its details. In this movie, God is in the broad strokes.