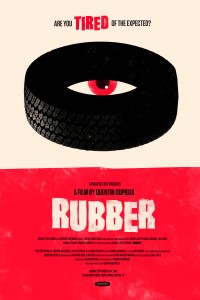 A small-town police lieutenant (Stephen Spinella) climbs out of the trunk of a car and addresses the camera about the arbitrariness of various popular film plots from the past. He looks straight into the camera and repeats the phrase “no reason”. This might be musician-turned-director Quentin Dupieux’s way of warning us not to rely too much our rationale for the next 85 minutes.

Meanwhile, a group of folks who looked like they just stepped out of a voir-dire session for jury duty set up camp on the edge of the desert. Their common aim is to observe the goings on of a rubber tire that has come to life in the form of a serial killer. They train their binoculars into the distance and perhaps wonder, much like those who are watching this French produced but English language comedy horror film, “Rubber”, just what they are doing.

The titular rubber tire, whose name is Robert, rolls down a two-lane blacktop somewhere in the American Southwest desert in search of something, its raison-d’être perhaps?

Robert has taken on some human qualities and appears to be on a mission. He dispenses with anyone who gets in his way. Why his victims include a crow and an innocent bunny rabbit is anyone’s guess?

His method is to come to a standstill, focus his mental powers on someone, shake furiously, and then zappo! The results are something out of the George Romero handbook. This is no surprise, as clearly Dupieux is gently mocking the horror genre and where else does one go but to the original master?

Make no mistake, however, “Rubber” is a comedy with as much in common with Luis Buñuel than the Wes Cravens of the world. We are supposed to be in the theater of the absurd.

The fact that the film has been made and released at all is a sign of the film’s success; certainly more than its watchability. That problem is helped along with the casting of Roxane Mesquida, a fetching damsel who Robert has the good sense not to include among his victims. She pouts and mopes about and is unclothed just long enough to keep things moving along.

“Rubber” also includes Wings Hauser and Jack Plotnick among its quirky cast. Other than Ms. Mesquida casting and the experimentalist spirit of the film, you’d have no idea that you were, in fact, watching a French movie.