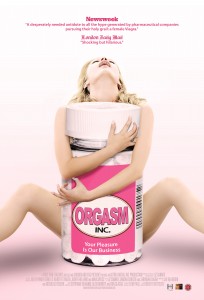 Ultimately what comes to the fore of Liz Canner’s “Orgasm, Inc.” has less to do with sexual fulfillment and more to do with whether every impaired experience in life calls for a prescriptive solution. At the core of this documentary, one which straddles the line of humor and earnestness, is the very serious issue of greed at the risk of health. The prospect that the pharmaceutical industry sees enormous profits in (a) first convincing women that something is clinically wrong with them if they can’t achieve orgasm and then (b) providing a solution in the form of a pill, cream, or spray, is quite serious, indeed.

While she challenges the industry, she doesn’t go far enough in hammering at the same people that hired her to edit the porn. Perhaps there was something of a conflict of interest which motivated Canner to remain a bit too moderate. The film is chock-full of interviews with sex therapists, pharmaceutical reps, frustrated women, and medical professionals, all espousing on whether or not there’s a medical cure for this problem or whether the issue is mostly conditional. The film’s most engaging moments involve the outspoken activist and psychologist Leonore Tiefer, who has been diligently attending and testifying at the Food and Drug Administration hearings for various pharmaceutical candidates. These procedures seem like they should be no-brainers since so much evidence is brought up showing potential dangers, like the altering of hormones, yet it’s disconcerting how close some of the medicines get to winning FDA approval. Another memorable moment is the filmmaker’s interview with an obviously conflicted saleswoman at a medical convention selling the procedure called a vaginoplasty (details of which may be Googled). She half-humorously requests that Canner hold off showing the film until she’s found a new job.

However, there are far too many advocates pushing hard for the antidote for female sexual dysfunction, and a few are shown, like Dr. Stuart Meloy, the inventor of the orgasmatron (wasn’t that invented by Woody Allen in Sleeper?), and the Oprah friendly Berman sisters, a cottage industry unto themselves. The sex therapists come across as transparent mouthpieces for the pharmaceutical industry. With only a little investigating, it is found that they have hefty deals for promoting Viagra for women.

There’s still a huge story here about the physical exploitation and risk that women are made to suffer, all in the name of sexual gratification and a doubtful ailment perpetuated by a segment of the medical industry and promoted by the media. A more serious film might have given this controversy more weight than Orgasm Inc., which is deadly serious one moment and vaguely humorous the next (perhaps to make the subject more palatable). Canner has laid out the issue, if only she had brought the matter to a stronger… sorry…climax.