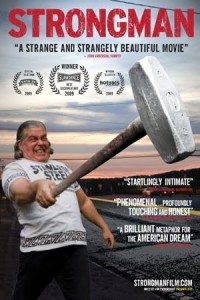 After watching Zachary Levy’s provocative documentary, one can’t help but wonder how far his down-at-the-heels subject might have made out in life had he been born into better circumstances—an education and a solid family upbringing, at the very least. The fact that Stanley Pleskun, aka Stanless Steel, made it as far as he did only speaks to his tenacity and his survival instincts, mental and otherwise.

Here is a man, after all, who has made a living using his brawn. He’s officially described as the strongest man in the world at bending steel and metal. Yet the documentary, vérité style, shows a man who yearns for a richer spiritual and emotional life but who struggles to articulate it. Levy, who has a background as a cameraman and now makes his directorial debut with this film, understands the universality of his subject. Stan has made it to the other side of middle age fighting the thought that his best years are behind him, and he can still perform amazing feats of strength. During the course of the film, we tag along to a number of his performances, including a televised talent show in London (a la America’s Got Talent) and another at a local New Jersey kiddie birthday party. It’s to Stan’s credit that he performs at both gigs with the same level of determination and receives the same level of gratification. Never for a moment during the movie does he phone anything in.

The key to success as a strongman, as we come to learn through watching his workouts, is to develop the strength in one’s hands and fingers as much as in one’s back or arms—Stan can bend pennies with his calloused fingers. It’s the emotional work that often proves too heavy for him. As much as he talks about holistic living, he’s often seen with a cigarette or nursing a beer. He also surrounds himself with alcoholic friends and a crack addicted brother who, while proud of Stan, are utterly incapable of supporting his struggles for success. The one exception is his befuddled girlfriend, Barbara, a former wannabe beauty queen who has a documentary’s worth of her own squelched disappointments. Since meeting Stan, her life has been reduced to bolstering his ego, refereeing between him and her sister, and delivering pathetic introductions at his shows. It’s painfully clear that their relationship, much like his sagging career, is failing, but it doesn’t take away from our rooting for Stan.

At moments, Strongman most resembles Darren Aronofsky’s The Wrestler in its hyper-sized lug of a front man reconciling with unrealized dreams. At the end of this movie, Stan lives in degrading circumstances, yet one never loses faith in his perseverance. At 113 minutes, Strongman feels about 15 minutes too long, but that’s a mere trifle, quite forgivable, in an ultimately satisfying film that marinates far longer.