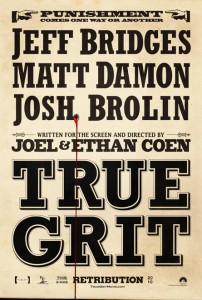 “I was told you were a man of true grit.” Those are the words of Mattie Ross, a 14-year-old force of nature who could just as easily be describing herself. Turns out she’s speaking to Marshal Reuben “Rooster” Cogburn as played by Jeff Bridges, continuing his never-ending upward career trajectory.

While Mattie (newcomer Hailee Steinfeld) may be young in years, she has the steely determination of someone far older. She has traveled to Fort Smith, Arkansas, to bury her father and to avenge his killer, Tom Chaney (Josh Brolin), a decrepit simpleton traveling with a bunch of outlaws. This is the Old West after all, a place where—no pun intended—it’s an eye for an eye. (In fact, Rooster happens to be missing one.) The marshal has a history of violence, with a bloody trail in his wake. Early on at an inquiry, he is cross-examined by an attorney about his renegade style. He might be a drunk and a cad, but he’s also a marksman and believes in his own brand of justice.

Rooster Cogburn is the creation of author Charles Portis, who has been getting a lot of press recently. One reason, no doubt, is because he has been largely ignored for the past 30 years but also perhaps because a lot of filmmakers taking on remakes like to say they have gone back to the original source (Matt Reeve’s recent “Let Me In” comes to mind). And as far as “True Grit” is concerned, that well may be true, but the patched eye is only one thing that brings the iconic John Wayne and the 1969 version to mind.

Wisely, the Coen brothers instead train their focus on the young Mattie Ross, as Portis does in his book. Perfectly cast, Steinfeld is the same age as the character as written. After haggling with (and outwitting) the local horse trader and teaching him never to judge a book by its cover, she uses her money to hire Cogburn to help her snag Chaney. Resistant at first, he ultimately relents. Another one who gives in to Mattie is the prissy Texas Ranger LaBoeuf, an excellent Matt Damon in the role Glen Campbell originated. LaBoeuf has been pursuing Chaney for reward money, and the trail has taken him to Mattie and Rooster Cogburn.

It doesn’t take long for Bridge’s Cogburn to begin admiring Mattie’ metal while Damon’s thin-skinned LaBoeuf actually tries beating her into submission with a switch. Cogburn’s cocked pistol aimed at LaBoeuf ends that episode and sends the Ranger off on his own for a short time. These early scenes with the three main characters traveling through hostile Choctaw territory while still navigating their own relationships provide the film with its tension. How will these three come together and do what’s necessary when they barely get along? Relationships are precarious in True Grit. There’s not all that big a difference between Cogburn and LaBoeuf’s relationship than there is between Cogburn and Lucky Ned Pepper (Barry Pepper), the leader of Chaney’s outlaw gang. Disrespecting someone can mean certain death. Justice is personal and swift.

Out on the open plains, the Coens take their time bringing the threesome to their confrontation, though that outcome is never doubted. No other filmmaker’s approach to storytelling is as deliberate and confident as theirs with the possible exception of Steven Spielberg, one of the film’s executive producers. No moment feels wasted. Roger Deakin’s cinematography is again a character in of itself. Like “No Country for Old Men”, the country looks both beautiful and fierce. While “True Grit” might have some sudden sparks of violence, the gore is minimal, and there’s an absence of sadism. Most of the gunplay, for example, is shot from a distance.

And as for Jeff Bridges, The Dude’s biggest problem is, of course, filling the boots of The Duke. No matter how good an actor Jeff Bridges is, and he’s certainly better than John Wayne ever was, he’s no icon. In a career of great and versatile roles that have included “The Last Picture Show”, “American Heart”, and “Tucker” to name just a few, he might only now be hitting his true stride. Along with “Crazy Heart” and “The Door in the Floor”, “True Grit” puts him at the top of his generation of actors.

“True Grit” ends with a flash forward some 25 years later with a middle-aged Mattie. It’s a scene that frankly feels pasted on and somewhat superfluous. No doubt if and when the Coens are confronted about this, they’ll shrug and simply respond, “It’s in the book, it’s in the book.”