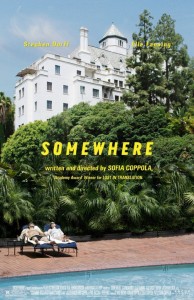 In the opening moments of Sofia Coppola’s fourth film, “Somewhere”, the camera is trained on a car driving in circles—a Ferrari, to be specific. The scene goes on for more than a few minutes, and it presumably puts us in the state of mind of our main character, Hollywood actor Johnny Marco, played by Stephen Dorff.

Life for Johnny has become tedious and meaningless. Almost always seen with a beer and cigarette in hand, the scruffy bad boy is so bored that he can barely keep his eyes open during a private pole-dancing performance in his room. That room is at the Chateau Marmont—the location of much past Hollywood debauchery (John Belushi died in one of its bungalows), and where most of “Somewhere” takes place.

While Johnny gets plenty of opportunities for meaningless encounters, deeper relationships come harder. In addition to the strained relationship he has with his ex-wife, he’s also been getting pejorative texts dispatched from an anonymous source.

It’s only when his ex drops off their daughter, Cleo, for a prolonged visit does Johnny start to come out of his malaise. In the form of Elle Fanning, an unusually gifted young actress, 11-year-old Cleo is a believable combination of poise and fear. On a business trip when Johnny brings his daughter along to Rome, a scene that feels especially reminiscent of a prior film of Ms. Coppola’s, Cleo is as much at home at the four-star Italian hotel as her father.

Perhaps still reeling from the reviews of her previous film, 2006’s “Marie Antoinette”, Coppola has returned to familiar ground—making a film thematically close in form to “Lost in Translation”, her 2003 Oscar-winning indie starring Bill Murray.

Both movies take place in hotels and are centered on a Hollywood star bored by fame’s trappings. Like Johnny Marco, Murray’s Bob Harris comes back to life through an unexpected connection with a young, attractive blond in the form of Scarlett Johansson.

That earlier film worked much better because of the chemistry between its two leads and for the fact that no one plays jaded and bored better than Bill Murray. He can simultaneously get our affection and our laughs just by reading a fax.

Stephen Dorff, while perfectly likable on screen—and he’s in almost every frame of the movie—just doesn’t have the necessary depth to carry it off. There’s little by way of script, so the tone of the film relies almost entirely on body language.

“Somewhere” never allows us in. We are meant to feel sorry for Johnny, but we have no idea why. We only learn about the extent of Johnny’s pain during a phone call toward the end, though it’s just not satisfying. Life just doesn’t seem that bad.

Coppola has a history of casting problems. It started with her own acting career, nepotistically ill-cast in “The Godfather: Part 3”. She made a similar mistake by casting her cousin, Jason Schwartzman, as a lead in “Marie Antoinette”. Her casting Dorff is a brave choice but potentially disastrous for this film’s chances. “Somewhere” is ultimately as capricious as its title suggests.