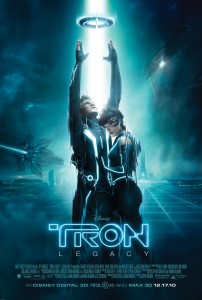 Jeff Bridges appears to be on a hot streak. Coming off his Oscar-winning success in last year’s “Crazy Heart”, he is back with the Coen Brothers’ remake of “True Grit”, and has not one, but two roles in “Tron Legacy”, the long overdue follow-up to the 1982 film he originally starred in.

This sequel has earned the distinction of being the most belated of all time, releasing 28 years after the original! The big question is, was it worth the wait? Well, yes and no.

The movie has an undeniable likability factor—that being its earnestness and respect for the original film—the first CGI movie ever made. And, to its credit, it never feels like it’s gearing up to be some hokey franchise like, say, “Pirates of the Caribbean”. There are just enough funny moments and cool effects to keep one interested. And, of course, there is Mr. Bridges.

The story begins with a flashback to 1989, where Kevin Flynn (Bridges) is putting his nearly pubescent son Sam to bed and regaling him with tales of the Grid. No sooner does he promise to take his son there some day, when he rides off on his motorcycle only to disappear into the ether.

Flash forward some 20 years, and Sam, played by Garrett Hedlund (“Four Brothers”, “Eragon”), is the reluctant owner of his dad’s gaming company Encom.

Rather than sit at the head of the corporate table, Sam prefers to keep the company honest and regularly undermines its greedy board by various means of sabotage. When he is visited by his dad’s old partner, Alan Bradley (Bruce Boxleitner, also back from the original cast), and handed the keys to the old gaming arcade … well, we know what’s in store.

No, there’s not one unpredictable moment in this entire movie. Nevertheless, audiences will attend this IMAX tent pole in droves and undoubtedly enjoy its impressive special effects and pop-synth score by Daft Punk, an homage to other 1980s sci-fi soundtracks like Vangelis’s “Blade Runner”.

The movie is 2-D until the point when Sam gets uploaded into the Grid. Then the movie goes 3-D and, for the next five minutes or so, you are actually transfixed. But as is the case with most 3-D movies, you quickly grow used to the spectacle and start regretting the fact that your wallet is less 3-D than it was before you entered the multiplex. And you’ve still got another 90 minutes of Programs and Users chasing each other on cool motorcycles and passing deadly Frisbees around.

Special mention must be made to visual effects wizard Eric Barba, known for making Brad Pitt look so old in “The Curious Case of Benjamin Button”. Here he reverse-ages Jeff Bridges, and the results feel like more of a work-in-progress.

So what’s the final verdict on “Tron Legacy”? Only moments after dropping off the glasses into the receptacle on the way out, I already started shedding the film from my emotional memory. Perhaps this is the result of years of “Matrix” and “Star Wars” sequels—they all start to bleed together.

Tron Legacy doesn’t bring anything new to the table accept a nostalgia factor to a small segment of the movie-going audience—the adults.