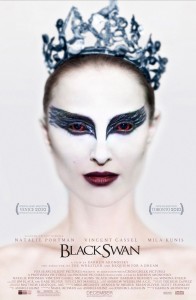 The often grandiose but cold “Black Swan” centers on a precious and virginal ballet dancer, Nina (Natalie Portman), a contender for the lead in a prestigious New York ballet company’s latest production of Swan Lake. Only the lady killer artistic director, Thomas Leroy (Vincent Cassel), stands in the way of her getting the lead. He has decided to replace the company’s aging prima ballerina (a still too-young Winona Ryder) with a younger, promising new star. He knows Nina can technically handle one half of the duality the role calls for, that of the elegant White Swan, but he’s skeptical about whether she can play the darker swan (that’s the one in the title). Nina wants the role desperately, to the point of returning Thomas’ flirtation. When he makes a move on her and kisses her, she bites into his lip, and she lands the role.

This begins the process of Nina finding her darker side (read sexuality), which causes her to start to mentally fracture. Aronofsky shows her meltdown through a number of doppelgangers, all somehow representing parts of her self. It’s right around this time when a new addition to the ballet company arrives from San Francisco, Lily (Mila Kunis). The sexually confident and gregarious Lily is only too eager to understudy the lead role. She also seems only too eager to get into Nina’s leotards, but then we wonder whether Lily’s actions (among other parts of the film) are just part of Nina’s imagination. We don’t ever really find out, and the ongoing pseudo-Freudian symbolism starts becoming clumsier and more obvious as the movie progresses. Not to say that the story isn’t quite straightforward, but it’s buried by the doppelgangers, the “All About Eve”-type subplot, and Nina’s relationship with her mother, which could be a movie all onto itself.

Barbara Hershey has the thankless stage mother role who keeps a tight reign on her daughter but is oddly moved, perhaps turned on, by the idea of her daughter being seduced by the predatory Thomas. Her performance, like something out of “The Turning Point”, doesn’t require a lot—nor does Ryder’s. It’s a shame, too, because both actresses’ return to the screen is so welcomed. While Ryder is given too little to do, at least she still looks as lovely as she did back in the days of “Reality Bites”. But Barbara Hershey, oy.  One must wonder if she knows how Aronofsky’s camera has made her appear. A former aspiring ballerina, Hershey’s tenacious mother is never seen outside her ominous Upper West Side apartment. With her tied back face and pulled back eyes, Hershey resembles the ballerinas with their heavy eye make-up. And that is, I assume, the point.

Black Swan is one of the most highly anticipated movies of the year. That’s understandable. After Aronofsky’s broad (Oscar nominated) success with 2008’s “The Wrestler”, expectations are gonna be up there. Aronofsky now belongs to that exclusive group of former independent filmmakers who continue to make un-Hollywood movies for the mainstream. Think Spike Lee or Sofia Coppola. Still, I miss the old Aronofsky. His debut, “Pi”, had such fresh storytelling and was a surefooted and original voice of independent filmmaking if ever there was one. That film stands out with only a few other standout debuts, including Hal Hartley’s “The Unbelievable Truth”, Susan Seidelman’s “Smithereens”, and Spike Lee’s “She’s Gotta Have It”. But somewhere along the way, Aronofsky has forgotten how to emotionally connect with his audience, if indeed, that’s something he’s interested in doing.  “The Wrestler” had Mickey Rourke’s unforgettable performance, and I couldn’t help but surmise that without that subtext of the actor’s own fall and resurrection, that film would have had far less impact. “Requiem for a Dream” was overwrought and near hysterical storytelling, but it had the benefit of the always wonderful Ellen Burstyn, an actress who can be counted on to deliver the goods.

While one needs to give Aronofsky credit for stretching and trying new things, one can’t help but feel that it’s a shame he isn’t still working with much lower budgets. Less star power, less spectacle, less everything. Aronofsky, with his sublime unique storytelling style, has the capacity to be on the level of someone like Orson Welles. Welles, while mannered at times, was also interested in symbolic filmmaking and off-beat casting, but his films still resonate and connect deeply with audiences. I only wish Aronofsky would rely less on spectacle and more on emotional honesty.