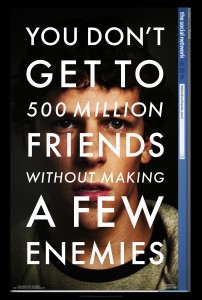 What is there left to say about “The Social Network”, David Fincher’s Rashomon tale about the birth of the most popular website and social media tool ever created? The film has been dissected by every blogger and film critic in existence. There’s been more forensics on this movie than on any season of CSI.

From Aaron Sorkin’s script (outstanding) to Jesse Eisenberg’s deadpan performance (under appreciated), the film has been picked apart more than any other movie in recent memory. As the New York Times’ A.O. Scott pointed out, “The Social Network” has undergone all this scrutiny exactly like that other much-hyped film which came out earlier this summer, Inception. Both films were the subject of endless articles and blog entrees, much of it days and weeks before the movie even came out. As of now, a small number of people have seen the film, including the crowd who recently attended the opening night of the New York Film Festival. The word on the street is that it’s… surprise! a good movie. Yep, and that’s just what it is. Okay, but is there more to it? That’s harder to say. It’s not quite the life-altering classic that it’s purported to be. It’s just a really taut, smartly written suspense film that will appeal to a great cross-section of our country. Sort of like the population that uses Facebook. 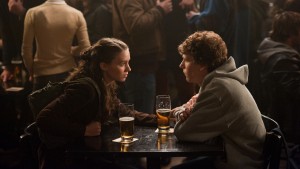 The story of “The Social Network”, for the two or three people that still aren’t aware, is about Mark Zuckerberg, the 19-year-old Harvard student who invented Facebook—or The Facebook as it was originally called—in a late night tear after being romantically rejected by Erica (Rooney Mara), a lovely Boston University girl with infinitely more social graces. Sullen Mark returns to his dorm room, cracks into a six-pack, and goes on to write a code for an interactive chick scoring system, a website that will ultimately become the titular social network.

The problem develops a bit later as Zuckerberg refines the site, doubtlessly aided by such fellow students as the Winklevoss brothers and their partner Divya Narendra (Max Minghella). The brothers are twins and, thanks to some excellent CGI, both are played by the actor Armie Hammer. They are among those Ivy League Greek Gods who are part of a tradition of elitist and exclusive institutions (in fact, they train for the Olympics in crewing). In other words, they are just the kind of people Zuckerberg and his other motley (read: Jewish) friends will never feel accepted by. So when they approach him about developing a dating site for those with Harvard e-mail accounts, a bell goes off in Mark’s head just as his resentment swells. Zuckerberg agrees, but he puts them off until he creates the first iteration of Facebook. Feeling like he ripped off their idea, the brothers end up taking him to court. Another to sue him is his former CFO and best friend Eduardo Saverin (especially well performed by Andrew Garfield, the new Spiderman). The only one who doesn’t is Sean Parker, a latter-day business partner. As played by Justin Timberlake, Parker, the young wunderkind who invented Napster, is all charisma and talk, who somehow manages to dazzle the otherwise untrusting Zuckerberg. 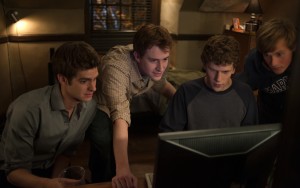 Flashbacks going back to 2003 reveal the various versions of what may or may not have happened regarding the site’s creation and the subsequent fallout. And this is a major point of the film. The actual truth is, to a great extent, beside the point. It’s about the telling of stories and the creating of your own truth. Like a Facebook profile, the truth is what you make of it. That’s certainly a topic of concern in today’s culture and one dealt with in another recent controversial film, “Catfish”. You can use a tool like Facebook to completely reinvent yourself—the self you would best like to put out into the universe. Your own virtual avatar, so to speak. It’s what we do every day, whether we are on a first date, sending out a resume, or going through a courtroom deposition. Facebook just gives one the additional advantage of anonymity.

“The Social Network” is a movie that will hit many nerves, not so much because of its dramatic heft but more so because we, the movie-going public… we, the Facebook Nation, are looking desperately for ways, to borrow a phrase from E.M. Forster, to only connect. The problem is you can’t honestly do it without shutting down, unplugging, and going off the grid. One needs to look another in the eyes to actually relate. There may not be a million dollars in it but the result in connecting? Priceless.