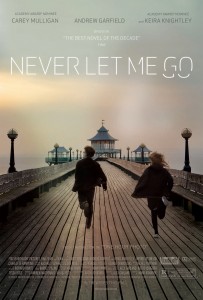 Director Mark Romanek’s new film, adapted from the best-selling novel by Kazuo Ishiguro, is a science fiction film that feels like anything but a science fiction film. So integrated are its unfolding futuristic plot elements that it comes across more like a romantic thriller. Yet those points, essential to the story line, make it difficult to review the film without giving away its pivotal secrets. Nevertheless, we will forge ahead trying to minimize the spoilers.

At Hailsham, a boarding house in England, students are raised for a very particular purpose. In the film’s early scenes, the young naives at its center are ignorant to that which makes them so special. When the startling news is finally delivered by a new and sympathetic teacher, the young charges accept the information without blinking an eye. They accept their fate. However, the divulging teacher (Sally Hawkins from Happy-Go-Lucky) is promptly sacked by the school’s icy headmistress, Ms. Emily, played by the always reliable Charlotte Rampling. But as far as the children are concerned, the notion of otherness is completely foreign. They only know what they they’ve been taught, being so secluded from the modern world outside the school’s gates.

The film mostly focuses on the love triangle involving Kathy (Carey Mulligan), her best friends Ruth (Keira Knightley) and Tommy (Andrew Garfield). As first portrayed by child actors, we first see the budding romance between taciturn Kathy and a simmering Tommy (he’s prone to fits of rage). Jealous of their affection, Ruth intervenes, and taking advantage of Tommy’s neediness, she steals him from the naïve and trusting Kathy.

The title refers to a lush ballad Kathy listens to, a track off a cassette tape that Tommy gave to her, one which she listens to repeatedly and which appears to ignite something within her. Thus we understand that the bond Kathy and Tommy share is unique and genuine while his relationship with Ruth is borne out of his fear and insecurity. Years go by and the grown threesome finally graduates from the idyllic Hailsham and moves onto a location called the Cottages. Unlike their time in Hailsham, the three have more freedom in their new surroundings, allowing them leave for short trips. But the idea of escaping never seems to occur to them. They never doubt their purpose.

In the last chapter of this gloomy, faintly dreamy film, the inevitable for which the three were raised comes to fruition. Doom weighs over the entire film, so much so that it ultimately compromises the love story and the other themes the story presents. The film looks splendid, due to Adam Kimmel’s fine camera work. Alex Garland, who wrote three of Danny Boyle’s screenplays, worked closely with Ishiguro on the strong script. All the actors deliver solid performances, but the film might have actually benefited had it focused a bit more on those science fiction aspects mentioned earlier. It plays down the sci-fi aspects to such a degree that they’re almost beside the point. They would have given the film a bit more heft. Instead, we leave the theater feeling somewhat malnourished.