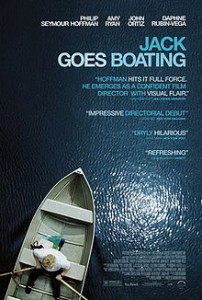 Oh, the very thought of Philip Seymour Hoffman finally at the directorial helm. Critics piled into the screening room, nary an empty seat to be seen. That one of America’s finest and most respected stage and screen actors was releasing something under his own imprimatur was most highly anticipated. The results are an uneven film, but one with gusto and flair. If only he hadn’t acted in it. His portrayal of Jack, a lonely sad sack limo driver who gets his first chance at love, is Hoffman’s most understated… or, more accurately, most under-performed role yet. And if you saw him in either Love Liza or Owning Mahowny, you might wonder how this is possible. It is. 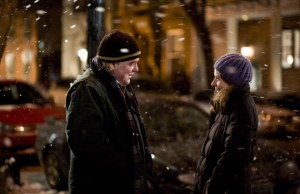 Jack’s only friends are Clyde (John Ortiz), a fellow limo New York City driver, and his girlfriend, Lucy (Daphne Rubin-Vega), a dynamo in heels. The couple obviously cares a great deal for Jack and opens their apartment to him for regular dinners, where Jack has settled in comfortably as the third wheel. That is until a setup with Connie (Amy Ryan), a new hire at Lucy’s office, over Chinese at their apartment. An eclectic collection of neuroses, Connie notes in Jack something she can trust, which catches Jack off guard. After he walks with Connie in the snow to hail a cab, she divulges her desire to go boating in Central Park—in the summer. Jack agrees to that and awkwardly asks her for a subsequent dinner date, which Connie mistakes for an offer to make her dinner. Rather than admit that he has no culinary skills whatsoever, Jack takes up an offer of taking cooking lessons from a chef at the Waldorf, a man who also happens to play a role in Lucy and Clyde’s eroding relationship. Meanwhile, Clyde decides to make teaching Jack how to swim his own personal project. If Jack can get over his terror of drowning, he can take Connie for that boat ride in Central Park. It appears that the idea Connie planted in his mind represents so much more to Jack.

“Jack Goes Boating” feels as though it were adapted from a play, and it is, one produced by the LAByrinth Theater Company for which Hoffman is co-artistic director, along with his co-star Ortiz. It seems perfectly appropriate to adapt one of their plays for Hoffman’s first shot behind the camera, but there’s not much to like about Jack. We don’t sympathize with him since he doesn’t have a dead wife or a gambling problem. In this movie, we are supposed to find him endearing because he loves reggae, often drowning out the world with his Walkman’s earphones, and wears knit hats that barely cover his haphazard dreadlocks. However, the pool scenes where Clyde teaches Jack are the film’s most inspiring. They movingly show how much the lessons are as much of a boost for Clyde as they are for Jack. While Jack gets over his own fear of submerging, Clyde processes the grief from his own sinking relationship. 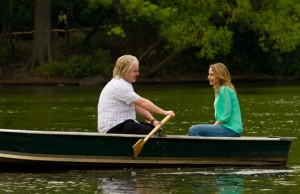 In a story which follows two couples at opposite ends of their relationships’ time lines, it’s Clyde and Lucy’s that is the more compelling. Not since George and Martha verbally tore each other limb from limb in “Who’s Afraid of Virginia Woolf?” has the dissolution of a relationship been so viscerally portrayed in an American film. That film, too, had a second couple with hope in their hearts, much like Jack and Connie. And in both movies we feel the mortification of being stuck in a tinderbox having to watch the hurt and the rage, those ghosts that haunt most failing relationships. By the time of the final dinner scene, where Jack’s weeks of preparation come to fruition, it’s his friend’s longtime relationship that burns to ashes—forget Jack’s potatoes au gratin. Had Bob Glaudini, who wrote the original play and adapted it for the screen, flipped the dramatic focus to the troubled marriage and pushed Jack’s story much further into the background, he might well have had a much stronger film on his hands.

Still there is something of a sunny ending. Jack gets his girl, Connie gets her boat ride, and we walk out of the movie theater feeling slightly battle scarred and looking for the first Bob Marley cassette we can get our hands on.