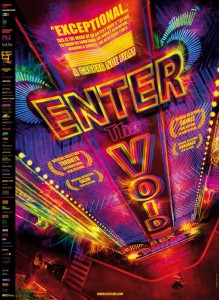 Oscar (Nathaniel Brown) is a petty drug dealer and consumer, a young American living in Tokyo. His younger sister, Linda (Paz de la Huerta) has recently joined him there after a period of estrangement.

Most of Gaspar Noé’s latest film, “Entering the Void”, is told from Oscar’s perspective. In the film’s first segment, the camera is Oscar’s eyes, something which recalls Julian Schnabel’s “The Diving Bell and The Butterfly” (2007). Then the camera becomes a window into Oscar’s brain as he experiences a psychedelic trip, interrupted by a business call that requires him to run to a local club called The Void. What takes place in the club sets the rest of the story into action.

Like Noé’s “Irreversible” (2002), a much grislier film to be sure, “Enter the Void”, too, plays with time. The camera/Oscar glides through the city of Tokyo, hovering one moment, swooping the next, as it ties all the history of that which brought Oscar to this moment. Noé’s camera is the ghost of Christmas past, present, and future in a Dickensian tale only appropriate in this new global age of filmmaking. And the reference to Dickens is not at all arbitrary.

We learn through flashbacks, if that’s what they can be called –for Gaspar Noé is no subscriber to traditional storytelling devices like flashbacks – that Oscar and Linda were in a horrible car crash in which their parents were killed. Oscar promises Linda that the two orphans would remain together forever. A recurring moment in the film shows the two siblings sitting together in a park while Oscar makes that vow. Regardless, Linda is pulled away by a social worker and it appears that the two have been apart until her arrival in Tokyo, a ticket purchased with drug money.  In those memories of Linda’s early weeks in Tokyo, she is a chaste innocent; the two seem to be on a high just being together again.

After a short time, it is clear that her deep feelings for Oscar are more a result of unresolved loss and pain than anything else. She acts sexually inappropriate with him; barely able to keep her hands or lips off him and wearing skimpy clothes around him. As Oscar necessarily withdraws or rejects, she alternately seeks his attention by acting out with alcohol and bad men.

“Enter the Void” is a striking work; some might say a minor masterpiece.  I caught the director’s edit at the screening I attended. At 160 minutes it was too long, at times it felt downright self-indulgent. The commercial release, at 137 minutes, might still feel a tad long to some viewers but is a far preferable running time. If one doesn’t fall in love with Noé’s style of filmmaking, one will not soon forget the experience of seeing it on the big screen.

I was reminded of such experimental filmmakers as David Lynch and David Cronenberg, perhaps because of the extended takes, the alternating perspectives, the eerie otherworldliness of the film but I also felt that I had not seen anything quite like it before. That feeling changed slightly when I went back and watched two of his pervious films, “I Stand Alone” and “Irreversible”, a film that put Noé on the map.  In that latter film, Noé he uses a similar structure that Christopher Nolan used in Momento, a film that came out in the same year. But those films, while the products of an assured filmmaker, rely more on shock value. “Enter the Void” prevails both from a technical standpoint (technology has surely changed since 2002) as well as from an emotional one.

This new film is unafraid to deal with what torments humans most of all: unresolved loss and the fear of entering the void.