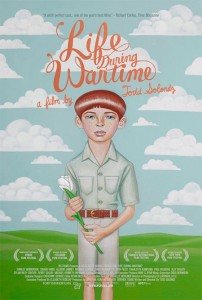 Like 1998’s Happiness, “Life During Wartime” revolves around those three Jordan sisters. Allison Janney plays Trish Maplewood this time around, replacing Cynthia Stevens. Trish is the sister desperate to have a normal life; or more to the point, desperate that every one believes her life is normal. A gag in Happiness had Trish lording the fact that she “has it all” over the head of her misfit younger sister, Joy. Yes, if by having it all she means a large house, three beautiful children, and a pedophile husband. That husband, Bill, so brilliantly played by Dylan Baker in “Happiness”, was a psychiatrist who swooned over his son’s adolescent school chums. He’s now played by Ciarán Hinds (“There Will Be Blood”).

Trish’s grip on normal could be more convincing. When coming home giddy from a date with a perspective mate, she tells her adolescent son, Timmy (Dylan Riley Snyder), that she’s wet. Timmy, a serious boy who yearns to understand life’s deeper mysteries, is in the middle of bar mitzvah preparations. He becomes understandably distraught when he later learns that his father is not dead but serving time in prison for statutory rape. This forces Trish to explain some of the family’s darker secrets. Watching Timmy try to make sense of all this is to watch a very convincing young actor at work.

Joy (Shirley Henderson) meanwhile still writes pathetic songs about loneliness and despair. She spends much of this movie visiting her sisters Trish and then Helen (Ally Sheedy), now a successful Hollywood screenwriter, and their mother. Joy is here married to Allen (Michael Kenneth Williams of The Wire), and an early scene of them in a tacky restaurant is one of the film’s funniest. Allen, who used to be white and so memorably played by Philip Seymour Hoffman, has declared that he has turned over a new leaf—he no longer makes obscene phone calls. This declaration is put to the test moments later when the waitress recognizes his voice and spits in his face.

Joy has another couple of restaurant scenes in Wartime, including one with the ghost of Andy (Paul Reubens), a former workmate she had rejected romantically and who subsequently committed suicide. When Andy was played by Jon Lovitz in “Happiness”, he had presented Joy with an antique ash tray with her name inscribed on it, but he quickly took it back explaining that it was for the girl who loved him. Reubens’ spectral Andy makes a similar gesture and once again strikes back in rejected anger.

“Life During Wartime” is perhaps most concerned with trying to rectify one’s past. While Trish declares that “the past is the past,” Bill, now free, also tries in his own way to patch things up. On his way to find his eldest son, he first picks up Jacqueline (Charlotte Rampling), a stranger in a hotel bar. Sex in her hotel room might not be everything he hoped it would be but it’s his own attempt at normalcy. After he awkwardly reunites with his son, a sad sack of a young man, the two have as much of a heart to heart as is possible in a Todd Solondz movie.

Most of the film takes place in either South Florida or Los Angeles, two locations that offer a sunny existence and where these characters couldn’t be more out of place. That juxtaposition contributes to the film’s wonderful tension. And Solondz knows his audience yearns for a laugh just at these moments. One such scene involves a dinner Trish throws for Harvey (Michael Lerner), her new suitor, and his loner son Mark (Rich Pecci). Another scene involves Ally Sheedy’s Helen, who resides in Beverly Hills. While she might be a lesser developed character, she provides some welcome comic opportunities, ones where you don’t feel bad laughing.

What might’ve compelled Todd Solondz to create a sequel to his critically acclaimed “Happiness”? One might ask, Todd… why return to the well? Surely commercial success is not the motivating factor. With a cast as stellar as the one he has put together for “Life During Wartime”, he could have made almost any other movie. One walks out of the film thinking, yeah, that was good but I’ve already done that, I’ve already been there. The characters were previously well developed in “Happiness”, and only in the case of perhaps of Trish’s sons is there any significant development. At the same time, you feel you’ve been in good hands. Solondz continues to make one compelling movie after another. And while he has no business directing a Charlie’s Angels sequel (something that he actually contemplated for a moment), one looks forward to a brand new film from this memorably pungent voice.