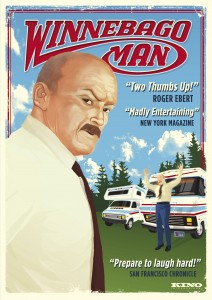 How many times have you wondered what has become of that old girlfriend or school chum from way back? With the advent of Facebook, it’s not so hard to quell your curiosity. Just enter a name and bingo, you’ve reconnected. How many times have you tried to remember the capitol of some obscure country or gotten into an argument about the difference between a spider web and a cob web. Just Google it. Getting an answer instantaneously is taken for granted in this day and age. When you do hit some snag, where there is no search result, it’s simply unacceptable. Ben Steinbauer, the director of the very entertaining documentary, “Winnebago Man”, has tapped into that insatiable and ubiquitous need for results.

In 2002, Steinbauer was handed a beat-up videotape, a copy of a copy; how many generations along can only be guessed. On that tape was a collection of outtakes of an irascible middle-aged man attempting to make a promotional film in 1988 for Winnebago’s sales department. Every time the spokesperson, Jack Rebney, flubbed a line, he went into a scorching tirade, dropping the F bomb, abusing his young crew members, and raking himself over the coals. The bewildered crew would end up compiling those outtakes, and, thus, a classic viral video was born. Whether or not the young editors’ intent was vindictive, the tape made its way to senior management at the RV company and Rebney was fired. Interviewed in the film these 20-odd years later, they had no idea of the proportion of the tape’s future popularity. Once YouTube debuted, the video became one of the leaders of the pack, watched by tens of thousands, many of which would consider themselves fans of Rebney. Steinbauer, in his journalistic way, wisely saw a story in it. What had become of this guy known as The Angriest Man in the World?

While his whereabouts proved elusive at first, Steinbauer’s investigation ultimately takes him to a mountain top in Northern California, where the now-aging Rebney is living a mostly hermitic existence. Agreeing to sit for an interview with the young director, Rebney still has some things to say, and the middle chapter of the documentary explores the power struggle between director and subject. Through a number of visits to the mountain, Steinbauer encourages Rebney to come out of obscurity and reconnect with his legions of followers. While Rebney scoffs, never for a moment do you quite believe that he’s not, in some way, attracted to the attention. These moments make for riveting cinema, and you feel that Steinbauer might not have known what he was in for, but thank goodness he had the good sense to let the cameras roll.

The film’s denouement brings Rebney back to civilization to appear at the annual Found Film Festival in San Francisco as a guest attraction. And attraction is the key word here. Many of the videos that play at the festival are the same ones that populate such portals as YouTube. They tend to center on the humiliation of their subjects, and it’s something that Rebney is conflicted about throughout the documentary. It’s obvious he is at odds with the ridicule and the fame. but what comes through at the end, perhaps unintentionally, is a moving portrait of a man dealing with both his sense of failure and his need for love.

The angriest man in the world does indeed come down from his mountain top, perhaps a little worse the wear, but still full of the old piss and vinegar. His appearance at the festival, which its organizers refer to as their Holy Grail, gives Rebney a sense of connectivity and closure that he had seemed to have given up. But it’s clear that Steinbauer, Rebney’s friend and foil, has gotten his money’s worth, and as you leave the theater at the end of this splendid documentary, you will no doubt feel the same.