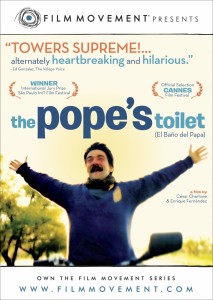 In sturdier economic times, Cesar Charlone and Enrique Fernandez’s film “The Pope’s Toilet” might have resonated less. It’s hard not to buy into and be won over by the unflappable Beto (César Troncoso), a smuggler of petty contraband who struggles to provide for his wife Carmen (Virginia Méndez) and their teenage daughter Sylvia (Virginia Ruiz). Along with a small band of his neighbors, Beto makes daily trips across the nearby border on his ramshackle bicycle from his impoverished Uruguayan village of Melo to Brazil. (His trips back are invariably disrupted by corrupt customs agents and the border patrol.) Beto has many reasons to feel oppressed and downtrodden in a scenario which much resembles that of his cinematic ancestor Antonio Ricci (“Bicycle Thieves”), who too had to rely on two wheels for economic survival.

Good news comes in the visit of Pope John Paul II, whose itinerary has him stopping in Melo where some 50,000 visitors are expected. An ever enterprising Beto decides that a pay toilet built only yards from the crowds will be the solution to all his family’s financial problems. Crunching the numbers with Carmen, Melo even believes that the proceeds will pay for their daughter’s tuition. Sylvia, much like her Dad, has ambitions of her own, which do not include sewing school. Bright and attractive, she is a most believable bi-product of her parents in a moderately paced movie which doesn’t emphasize character development. The tone is “The Pope’s Toilet’s” biggest challenge. Whether the movie is trying to be an inspirational drama in the legacy of Angela’s Ashes, or an offbeat comedy (remember that on the surface this movie is about making a toilet), remains a question. Lovingly photographed by César Charlone, it is in the end worthwhile and quietly moving. In an age when one must think of new ways and means just to make ends meet, Beto is indeed a man ahead of his time.