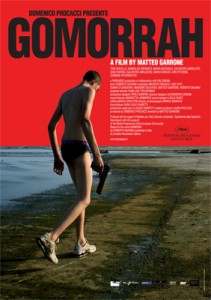 After watching “Gomorrah”, you’re likely never to have much of a vicarious thrill watching a movie mob hit again. Actually, considering the reach of the Neapolitan crime network—or Camorra as it is locally referred—the glamorous lure of crime films should be the least of one’s concerns. Bleak, brutal, and raw, Gomorrah is told in a matter-of-fact yet intense manner that in no way fetishizes gangland crime, as is the case with many movies and the Sicilian Mafia. Perhaps it’s due to the immigrant saga and the pursuit of the American Dream, but the Sicilian Mafia has gotten some very good mileage out of Hollywood. These films, as violent as they may be, usually include a code of honor, which makes the movies more palatable. With the Camorra—Gomorrah is a convenient and appropriate variation—rules are always changing, and loyalty to someone one day can get you killed the next.

The movie has caused quite the sensation back in the old country. The author of the 2006 non-fiction book from which the screenplay is adapted, Roberto Saviano, requires around-the-clock police protection since threats have been made on his life. Told through five interwoven storylines a la “Traffic” or “21 Grams”, “Gomorrah” is stripped down and documentary like in its approach. There are absolutely no feel-good moments and even the more relaxed moments, like when two teenage wannabe and renegade thugs lightheartedly reenact dialogue from Brian De Palma’s “Scarface”, only fill you with more dread.

Not to say there aren’t a few sympathetic characters. Don Ciro (Gianfelice Imparato) delivers money to clan families who live (imprisoned behind closed doors and shutters is more like it) in a Dante-esque tenement. Walking the corridors of this concrete hell, there is a visceral and persistent sense of danger. Late in the movie, the low-level middleman tries to make a deal with a member of the opposing clan, only to be told he would have to buy his life in order to switch. Young Roberto (Carmine Paternoster), just out of school, works for Franco (Toni Servillo), a corrupt, if nattily dressed, head of a waste disposal company that dumps toxic material into makeshift landfills. The horrifying irony that Franco is poisoning the same land where he lives in is hardly lost on him. In “Gomorrah”, there is no morality tale to be learned. Wealth and power are all that count as long as you are still breathing; anything else is weakness.

With a hand-held camera often lagging behind the characters, scenes have a loose rhythm (no rat-tat-tat editing here) so that when violence strikes, it’s a shock. As the director explained to the press, he wanted his audience to feel like it was watching something it witnessed as a passer-by. (There is actually relatively little physical violence; most difficult to watch are most of the characters’ utter lack of humanity for each other.) But director Matteo Garrone is not a distant observer. His overall tone may be dispassionate, but the film is clearly a shout of anger.